The V2I DC Executive Committee (V2I DC-EC) serves as a leadership body of the Coalition. The V2I DC-EC provides input to each of the five Technical Working Groups (TWGs).  In addition to serving in a leadership role to the V2I DC, The V2I DC-EC interacts with the Connected and Automated Vehicle Executive Leadership Team (CAV-ELT).

Click here for a complete summary of the meeting.

During the April meeting, the Executive Committee reconfirmed the need for ongoing actions of the V2I DC, and agreed to a set of focus areas for Phase 2 of the V2I DC to be:

1.    Increasing OEM interaction (e.g. data needs of OEMs and owners/operators
2.    Increasing understanding of the use of the V2I Guidance documents, particularly how to develop interim
information to support end user needs between formal releases of the Guidance documents
3.    Encouraging SPaT deployments nationwide
4.    Initiating V2I security activities with an emphasis on defining a V2I approach for the four focus areas
5.    Developing a roadmap for the four V2I focus areas defined by the Executive Committee through common
definitions and prioritization of applications within each focus area
6.    Defining needs, priority, direction, and consistent terminology for V2I outreach to various end users
7.    Mining data from completed/underway projects/proposals to better understand approaches to V2I
applications

The V2I DC Executive Committee held their inaugural meeting on September 9-10, 2015. A summary of the September, 2015 V2I DC-EC meeting can be found at the following link:

During the September 9-10, 2015 meeting, the V2I DC-EC agreed to a set of goals for the overall coalition. These goals are summarized below:

Goal #1: Help to accelerate the deployment of V2I technologies at intersections where the majority of crashes and/or congestion occur;

Goal #2: Help to accelerate the deployment of V2I technologies to support end of queue warnings in locations with high rates of rear-end collisions;

Goal #3: Help to accelerate the deployment of V2I technologies for work zone management; and

Goal #4: Help to accelerate the deployment of V2I technologies for curve warning systems.

The V2I DC EC roster is shown in the table below:

V2I DC-EC Relationship with Other Organizations

As noted above, the V2I DC-EC interacts with USDOT and the CAV ELT.  The figure below illustrates the overall interactions of the V2I DC-EC. 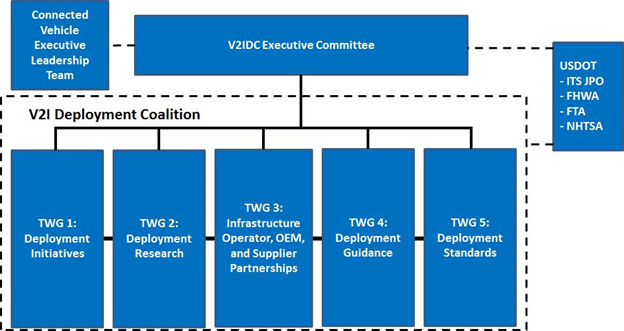