Purpose of the SPaT Challenge FAQs

These and other resources are available at the National Operations Center of Excellence (NOCoE) website at http://transportationops.org/spatchallenge

What is the National Connected Vehicle SPaT Deployment Challenge?

The American Association of State Highway Transportation Officials (AASHTO), the Institute of Traffic Engineers (ITE) and ITS America (ITSA) working together through the V2I Deployment Coalition have challenged state and local public sector transportation infrastructure owners and operators (IOOs) to work together to achieve deployment of roadside Dedicated Short Range Communications (DSRC) 5.9 GHz broadcast radio infrastructure to broadcast signal phase and timing (SPaT) in real-time at signalized intersections on at least one road corridor or street network (approximately 20 signalized intersections) in each of the 50 states by January 2020. This is commonly called the the SPaT Challenge. The National Highway Safety Traffic Administration (NHSTA) is in the process of requiring all new light vehicles sold in the US to be equipped with DSRC radios which can continuously and anonymously transmit basic information about the location, speed and critical operation of the vehicles. These radios will also be able to receive agency transmitted data, such as SPaT, with the intent to support safer, more efficient operations.

Why should I do this now?

Deploying the systems necessary to accomplish the SPaT Challenge in a number of locations around the country will provide state and local transportation agencies with a tangible first step for deploying V2I Applications, promote future more advanced V2I applications, and demonstrate a commitment to the DSRC-based V2I deployments that are being planned by automobile manufacturers. Also, the technical deployments required to accomplish the SPaT Challenge are relatively simple to deploy and fundamental to a number of V2I applications.

The net result of deploying SPaT will be to accelerate V2I application deployment by the automobile manufacturers, the private sector, and the public sector. IOOs are encouraged to work with other agencies within their region to identify deployment partnership opportunities.

Will this work with my controllers?

Do my signals need to be interconnected and do they need to communicate back to a central system?

Ideally the location chosen for deployment will be where there are interconnected signals that are monitored at a central system. This will ensure the ability to monitor the operations and performance of the system and learn from that performance.

What type of hardware and software do I need to deploy?

Figure 1 shows a basic layout of the equipment and information flow to enable SPaT transmission via DSRC at an intersection. 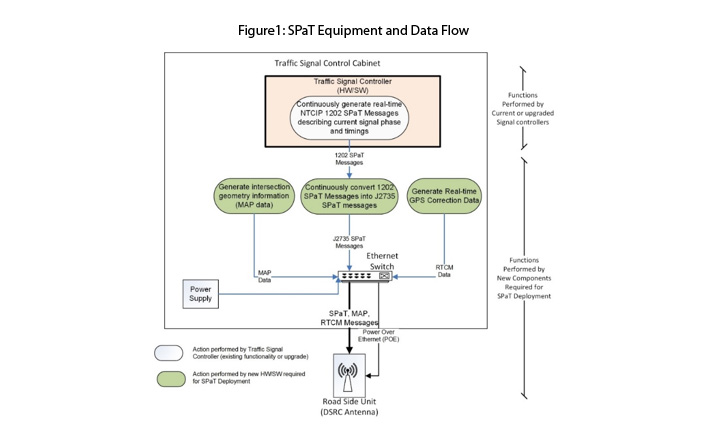 Is the needed equipment deployment ready?

DSRC radios are manufactured by several companies. The RSUs should meet existing federal specifications. The software that control DSRC radios is still evolving, and is being updated regularly. When you purchase the radio, it is recommended that you request assurances from your vendor that they have the latest software and expect that it will need to be updated in the future, so understand the unit’s software update process.

Does it matter how I currently operate my signals (fixed time, actuated, adaptive)?

Yes, SPaT has been deployed on both fixed and actuated signal systems and been shown to work fine. There have not yet been any deployments done on adaptive systems so there is currently no established understanding on how SPaT will work with such systems. Most of the work done to date has been with fixed time signal and where the deployment experience are relatively more mature.

Do I really need to deploy at 20 intersections?

The goal is to achieve DSRC infrastructure deployment of SPaT and MAP broadcasts in at least 20 signalized intersections in each of the 50 states by January 2020, and to commit to operating the SPaT broadcasts for a minimum of 10 years. In situations where a corridor of this size is not available, or the local technical or financial environment can only support a smaller number of intersections, deployments are still encouraged. The most important aspect is to achieve some deployment within each state.

Will future changes and revisions to hardware and software impact the deployment I do today?

Probably. As is typical with technology-based systems, there will likely be changes. The RSU hardware federal specifications are likely to be relatively stable for the near future. The software for applications is still being developed. As more systems are deployed and experience is gained, refinements and additional functionality will be needed. Manufacturers and application providers will refine their products and services to meet these evolving expectations. Hardware and data standards will also evolve to meet future needs. Eventually, equipment replacements may be needed.

The current state of the connected vehicle technologies could be considered at a level of maturity equivalent to an engineering prototype. CV Pilots and other testbeds around the country are working to advance and mature the technology. So changes are likely, and could be from unexpected sources depending on what we learn from each other.

Is the data/system safe and secure?

SPaT deployment under this Challenge should be considered as a test deployment designed to help an agency learn about the benefits and risks of deployment. Initially, data disseminated by the DSRC broadcast at a SPaT-enabled intersection will be a “one-way transmit only” broadcast (i.e. there will be no vehicles broadcasting data back to the DSRC), therefore reducing the risk of a security breach by inappropriate data being sent to the DSRC, provided configurations are done correctly.

Additionally, a Security Credential Management System (SCMS) based on IEEE 1609 is being developed to maintain the integrity of sent messages and when properly configured it provides safeguards to protect against the message being recycled or rebroadcast by others outside the operating agency. An SCMS will reduce the risk of non-authorized systems transmitting false data, provided configurations are done correctly. The SCMS Proof of Concept is being developed by the automakers for the federal Connected Vehicle Pilot Deployment Program and may be available for other deployments as soon as mid-2018. This SCMS Proof of Concept will be the basis for a National SCMS. Additional information can be found in the SPaT Challenge Resource titled: The Security Credential Management System and SPaT Broadcasts.

It is recommended that SPaT be installed on signals that communicate with a central signal control software to best monitor their performance and note any anomalies. At this point, not all of the security issues are understood, but as more systems are installed both under this challenge and at national pilot deployments, they will become more apparent and addressable.

How much will this cost?

Costs are dependent on the signal hardware that currently exists at an intersection and on the availability of software. SPaT deployment depends on the controller’s ability to send SPaT data and on software to translate the data from the controller into standard messages that the DSRC roadside unit sends to vehicles. The amount of equipment needed at the controller to do this will vary depending on the model and age of the controller. The cost of software will vary depending on whether existing software meets the project needs or whether the agency needs to develop software. It is assumed that power is already available at the intersection. Cost estimates based on limited early deployments indicate that installation of a working system at an intersection can vary from $15k to $50k. More recent installations suggest that the cost can be as low as $5k per intersection if controllers that can send SPaT data are already in place. In addition, it is desirable to have the intersection report back to a central monitoring station, so back haul communications should be considered and its cost calculated if needed.

Is there funding to do this?

There is no dedicated funding that has been established to fund SPaT deployment. Agencies are expected to fund the effort using resources currently available to them and are encouraged to look at locations there they are already planning to do intersection and signal work and see if the SPaT work can be included. Agencies may consider existing ITS budgets, CMAQ funds, ATCMTD grant opportunities, and other such sources.

Will vehicles be available that can receive the SPaT messages?

NHTSA issued a notice of proposed rulemaking which proposes the idea of requiring DSRC communication on all new light vehicles starting near 2021. If enacted, this rule would require DSRC radios on vehicles that may also enable a broad range of V2I applications, in addition to the V2V applications that those cars will have on board. The SPaT Challenge supports that deployment and prepares us, as infrastructure owners, to take advantage of these life-saving features and mobility enhancements.

What are the direct benefits to my agency?

The SPaT Challenge is fundamentally about installing DSRC units to broadcast SPaT and MAP messages. This is a one-way broadcast and there are currently no production vehicles that have implemented in-vehicle applications which will use this data. The benefits of this challenge are: to gain experience with this new technology, to lay the groundwork for installation of specific software applications, and to demonstrate to the auto industry that the infrastructure owners are committed to building infrastructure to support V2I applications and entice them to move forward with those applications. Ultimately, many safety and mobility benefits will result from V2I applications, but those will not be realized from the SPaT Challenge alone.

This is an opportunity for your agency to develop institutional experience and to help the transportation field migrate to a connected environment. Carefully exposing the technologies to multiple operating conditions, needs, and demands will ultimately help the technology become more useful, mature, and robust. It can also help determine any gaps or opportunities from existing ITS infrastructures that have not been considered by the technologies.

Are there optional efforts that I can pursue to increase the value of my deployment?

In some situations, agencies may decide to begin with the SPaT broadcast alone, and add MAP and RTCM as funding is allowed. This is recognized as a valid approach so long as the understanding is that MAP, and possibly RTCM, will be required before vehicle equipped applications recognize the benefits of the broadcast.

In some cases, agencies will choose to deploy applications beyond the SPaT, MAP, and RTCM broadcasts. While this will be encouraged, and could yield short-term benefits, it is not expected as part of the challenge. To maintain a uniformity around the country and provide a base for broad-scale application deployment, SPaT and MAP messages will eventually need to be an element of every deployment. The need for vehicle position correction (transmitted as an RTCM message) is being studied at this time. Some examples of the types of additional applications that agencies may decide to add to leverage their SPaT, MAP, and RTCM deployment are:

Can I work with a 3rd party and provide my SPaT data from my central control system for them to distribute to meet this Challenge?

This approach avoids the need to install intersection level equipment but is only viable if an agency has a centrally controlled and/or monitored signal system. With this approach there are concerns about data rebroadcast latency, which will be dependent on how the central control system communicates with the signals and how the provider rebroadcasts the data. These companies may also have some prearranged data sharing agreements with other parties that may influence with whom you may ultimately be able to share the data.

In contrast to this approach there are additional benefits for implementing the SPaT Challenge at the intersection level:

For these reasons the SPaT Challenge is specifically focused on requiring the transmission of SPaT data at the intersection via DSRC.

Need to Know More?
Go to the National Operations Center of Excellence for a comprehensive list of resources which will help you in your quest to take the Challenge. http://www.transportationops.org/spatchallenge/resources