The goal of the SPaT Challenge is to encourage state or local agencies throughout the United States to deploy Dedicated Short Range Communications (DSRC) broadcasts of Signal Phase and Timing (SPaT) at approximately 20 intersection locations, typically in a corridor or network setting.  The intent of this document is to support agencies that have decided to deploy SPaT broadcasts by providing an overall summary of the implementation process.

This document is arranged as follows:

Some of these companies offer installation at no cost to the agency but requiring that the central signal control system uses NTCIP compliant communications protocols and requiring a SPaT data stream via Ethernet from the central signal control computer.  And they typically offer some agency control over who the data is then redistributed to. The company would also typically need to know intersection layouts and phase diagrams.

This approach potentially avoids the need to install intersection level equipment but is only viable if an agency has a centrally controlled and/or monitored signal system.  There are also concerns about data rebroadcast latency, which will be dependent on both how the central control system communicates with the signals and how the installed rebroadcast hardware works. These companies may also have some prearranged data sharing agreements with other parties that may influence who you may ultimately be able to share the data with.

The intent of this section is to describe the overall actions required for a SPaT broadcast deployment to help readers understand the concept of resources presented later in this document.  The operation of a DSRC broadcast of SPaT messages can be described by a series of high level actions that must occur, as follows:

Conversion of 1202 SPaT Messages to J2735 SPaT Messages.  In order for the DSRC broadcasts of SPaT messages to be compliant with the J2735 standards for V2I message exchange, the 1202 SPaT messages must be converted into J2735 formats prior to broadcast.  This will ensure that vehicles operating V2I communication capabilities can interpret the message communications.  Currently, the J2735 Version 2016 is the latest version.

Generation of intersection MAP data.  In order for vehicles approaching an intersection to interpret the SPaT messages being broadcast, the vehicle systems must have a reference to determine the approach (or signal phase) they are following, and therefore understand the current display on the signal head.  This is accomplished by the DSRC broadcast including a MAP message broadcast.  The MAP message is not created in real-time, but rather is a static description of the geometries of the intersection and vectors describing approaches.  The vehicle systems will compare GPS location readings on the vehicle against the MAP message and determine the vehicle’s approach.

Generation of GPS Correction data.  In order for the vehicle to accurately identify the approach/phase using the MAP message, it is critical that the location of the vehicle (determined by the on-board GPS) is accurate.  This can be accomplished by a broadcast of GPS correction information as standardized by the Radio Technical Commission for Maritime Services (RTCM) as a method for minimizing the effects of GPS error caused by atmospheric conditions or reduced satellite access.  The general concept of RTCM is that a base station with a known location (the location may be known by either by surveying in the station location or operating a GPS receiver for a long continuous period of time) continuously receives satellite signals and determines a current latitude/longitude position given the current atmospheric conditions.  The base station then compares the position determined with the current atmospheric conditions to the known location and computes a correction factor that corrects the current calculated position to the known position.  This correction factor is the RTCM message that can be sent out to vehicles.  Depending upon the vehicle and the GPS system on board, the vehicle may or may not be able to apply the correction factor.  Creation of the RTCM message may either be done by operating a base station at the intersection, or by retrieving the RTCM from an on-line source, or by a central calculation at the TMC.

Figure 1 below illustrates a high level physical representation of the functions to be performed to accomplish real-time DSRC broadcast of SPaT messages.  Actions drawn as white ovals represent those that are either performed now by traffic signal controllers (TSC) or that would be performed by TSC upgrades.  Actions drawn as green ovals represent those functions that would require additional components beyond what is in typical signal control cabinets.  While various approaches are possible, Section 4 of this document presents the V2I Hub (developed by FHWA) as an open source software solution with supporting reference documents to perform the needed functions for SPaT deployment. 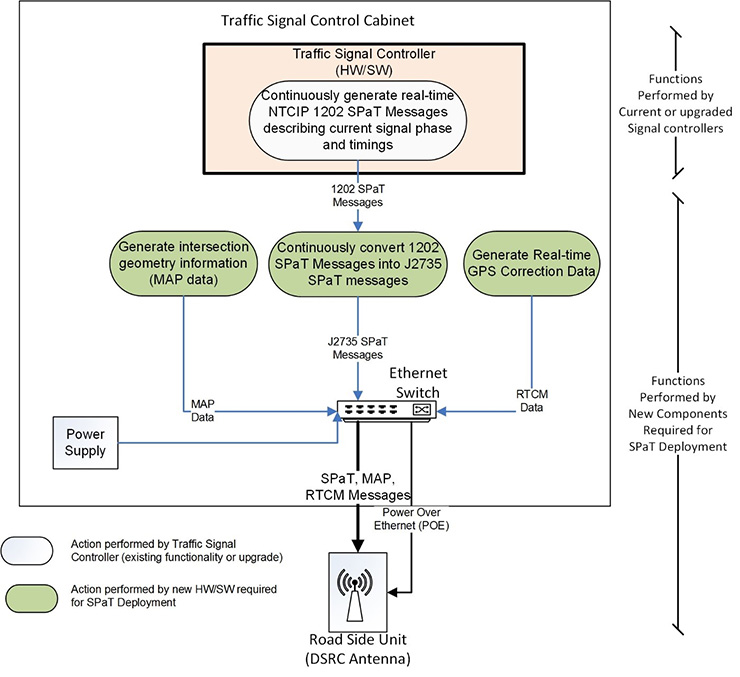 The intent of this section is to highlight and link to three documents that are available to support agencies and contractors as they deploy DSRC SPaT broadcasts.

In September 2016, FHWA completed a project that documented the process of deploying DSRC broadcasts of SPaT, MAP, and RTCM corrections.  As part of this project, the project team created a checklist of common design, approval, and installation activities required to successfully complete deployment of DSRC systems.

The bulleted list below identifies the items in the checklist:  The detailed checklist, together with detailed activities for each bullet can be found in the V2I Hub Deployment Checklist & Guidance[1] document.

The Draft DSRC Roadside Unit (RSU) Specifications Document provides details on hardware requirements that would be used to support SPaT, including:

The following bullets describe the minimum hardware and software components that is required at the intersections where a SPaT broadcast is planned to be deployed:

As noted in the illustration in Section 2, typical hardware and software components that need to be added to accomplish SPaT broadcasts include:

The V2I Hub – A Resource for SPaT Deployment

The V2I Hub is an open source software product and series of guidance documents to support the needed SPaT, MAP, and RTCM broadcasts.  As illustrated in Figure 1, there are three high level functions that need to be performed (beyond the SPaT output generated by the TSC) to assemble the needed information to be sent to the DSRC antenna (illustrated as green ovals in Figure 1).  The V2I Hub offers solutions to accomplishing these functions.  The following bullets and hyperlinks provide high level descriptions and links to further resources.

The Vehicle-to-Infrastructure (V2I) Safety Applications Performance Requirements, Volume 1 for Common Requirements (FHWA-JPO-16-248) and Volume 3 for RLVW (FHWA-JPO-16-250) contain performance requirements for the storage, transmission, and processing of SPaT, MAP, and RTCM messages for the issuance of RLVW notifications, alerts, and warnings.

REGISTER AND BE UP-TO-DATE!