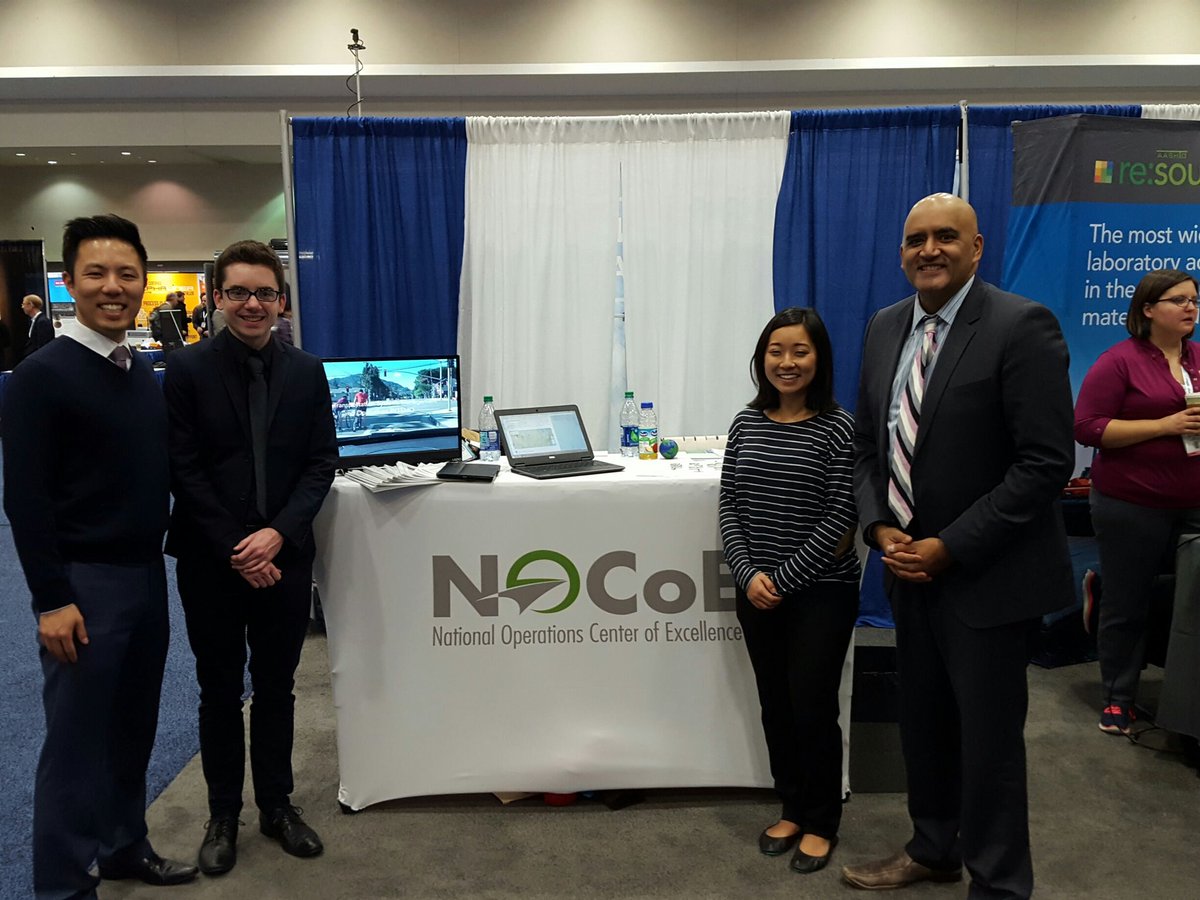 December of 2016, NOCoE held a contest for college students interested in TSMO. The winners were to submit a video explaining why TSMO matters to them as prospective transportation professionals. Congratulations to winners California Polytechnic State University, San Luis Obispo students Ashley Kim and Travis Low who won a trip to this year's TRB annual meeting (Travis and Ashley are pictured here with Managing Director Patrick Son and NOCoE Board Chair Shailen Bhatt). Below are excerpts of their shared TRB experience and career goals, shared with NOCoE and ITE Journal.

Ashley Kim, who was the recent recipient of the Outstanding Women in Engineering Award at her CalPoly, explains that after she graduates, "I am driving down to San Diego for the Western District Annual Meeting! I plan on relocating to Los Angeles and working in transportation consulting. I am interested in traffic analysis, active transportation planning and design, and the relationship between public health and transportation." Ashley further explains, "I grew up bicycling on the bike trails in Irvine, CA, and I've enjoyed studying transit maps and planning car-less day trips from Orange County to Los Angeles for me and my friends in high school. At Cal Poly, I really enjoyed the Introduction to Transportation Engineering course that I took during my third year and joined ITE. Only two years later, it's amazing how many memories I've made through ITE (District Conferences, Student Leadership Summits, Traffic Bowls, and service to the ITE student chapter)."

Travis says he initally became interested in transportation because "I have been fascinated by transportation for as long as I can remember. Growing up, I would typically be just as entertained by the travel days of our family vacations as by the destinations. Since I also had an interest in math and science, I decided to study civil engineering in college because I realized it would allow me to combine these together. I like that transportation is highly visual Travis Low, EIT is a graduate student at Cal Poly San Luis Obispo pursuing a master’s degree in Civil and Environmental Engineering. He received his bachelor’s degree in Civil Engineering from Cal Poly San Luis Obispo in 2014 and worked in transportation consulting for over a year before returning to school. Travis has served in several officer roles in his ITE student chapter, including as President during the 2012-2013 school year. He was a member of the winning team in the 2012 Western District Traffic Bowl and a member of the planning committee for the inaugural Western District Student Leadership Summit in 2014.and something that everybody deals with every day."

Ashley and Travis explained that this was their first time attending the TRB annual meeting and "we are very grateful for the opportunity. With the combination of technical sessions, posters, committee meetings, exhibits, and networking events, we quickly realized there was no way to do everything! We also enjoyed the chance to meet NOCoE Board members. We each hope to present our thesis research at next year’s Annual Meeting."