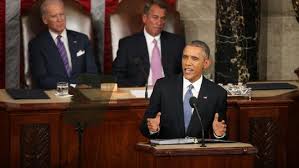 Urging congressional lawmakers to fund long-needed upgrades to U.S. infrastructure, during his 2015 State of the Union address, President Obama urged legislators to focus their debate on roads, bridges, rail, highways and high-speed Internet – not the $5.4 billion Keystone XL pipeline extension.

“Twenty-first century businesses need 21st century infrastructure — modern ports, stronger bridges, faster trains and the fastest Internet. Democrats and Republicans used to agree on this. So let’s set our sights higher than a single oil pipeline,” a statement which drew cheers from among the joint session of Congress.

Conservative lawmakers and industry groups support the 1,179-mile pipeline from the tar sands of Western Canada to refineries in the U.S., a project they say would reduce the country’s reliance on oil from overseas, aid the energy sector and provide thousands of construction jobs.

To read more, please click on the link above.