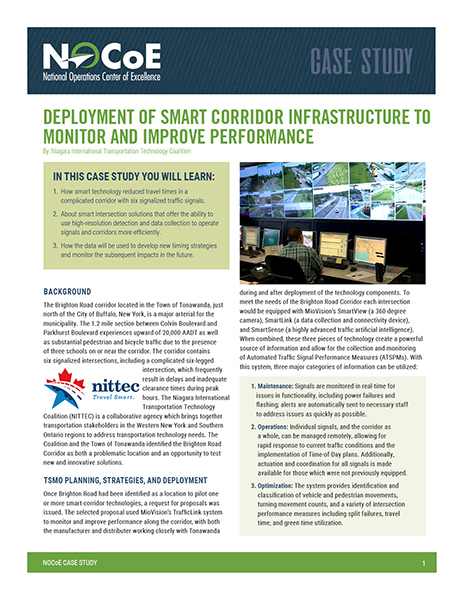 The Brighton Road corridor located in the Town of Tonawanda, just north of the City of Buffalo, New York, is a major arterial for the municipality. The 1.2 mile section between Colvin Boulevard and Parkhurst Boulevard experiences upward of 20,000 AADT as well as substantial pedestrian and bicycle traffic due to the presence of three schools on or near the corridor. The corridor contains six signalized intersections, including a complicated six-legged intersection, which frequently result in delays and inadequate clearance times during peak hours. The Niagara International Transportation Technology Coalition (NITTEC) is a collaborative agency which brings together transportation stakeholders in the Western New York and Southern Ontario regions to address transportation technology needs. The Coalition and the Town of Tonawanda identified the Brighton Road Corridor as both a problematic location and an opportunity to test new and innovative solutions.

Once Brighton Road had been identified as a location to pilot one or more smart corridor technologies, a request for proposals was issued. The selected proposal used MioVision’s TrafficLink system to monitor and improve performance along the corridor, with both the manufacturer and distributer working closely with Tonawanda during and after deployment of the technology components. To meet the needs of the Brighton Road Corridor each intersection would be equipped with MioVision’s SmartView (a 360-degree camera), SmartLink (a data collection and connectivity device), and SmartSense (a highly advanced traffic artificial intelligence). When combined, these three pieces of technology create a powerful source of information and allow for the collection and monitoring of Automated Traffic Signal Performance Measures (ATSPMs). With this system, three major categories of information can be utilized:

The implementation costs also incorporated two years of wireless communications to the intersections and access to MioVision’s TrafficLink, a web-based platform through which the corridor can be monitored and ATSPMs can be generated. Installation of the necessary components at all intersections in the corridor was completed on August 8th, 2019.

This project began with the Town of Tonawanda applying for a NITTEC grant that aimed to deploy technology in an effort to improve transportation in the region. Close coordination was maintained to make sure the deployment went smoothly. Additionally, MioVision was responsible for training Tonawanda and NITTEC personnel in use of the data portal and generating the reports detailing the improvements made. While not directly involved in this deployment, the New York State Department of Transportation (NYSDOT) as well as other nearby municipalities in the region were included in the discussion and training with the system due to their interest in installing the technology on their respective corridors.

After the equipment was installed, data was collected for a period of time without implementing any changes. Full actuation was then implemented for all signals in the corridor on Friday, August 16th and data was compared to the base conditions with the system turned off on Wednesday, August 21st. These two days were found to be similar in traffic volumes, with only a 0.4% difference between them, and could therefore be compared. Through the use of ATSPMs, significant improvement in the corridor was observed, even without implementing changes to timing plans.

As the afternoon peak was the time when the greatest decline in level of service was observed, this was the period of focus of ATSPM evaluation. With the fully actuated system engaged, unnecessary stops along the major arterial were minimized, with side street traffic now served when it was most optimal for the system instead of immediately upon their arrival. Interruptions to flow along the Brighton corridor were reduced by over 30%. Green utilization was also found to be improved by the system, with the number of split failures (instances of a signal cycle length being inadequate to service demand) during the PM peak reduced from 75 to 63 per hour, a 16% reduction. Additionally, travel-time though the corridor was reduced by 24 seconds (13%) in the eastbound direction and 27 seconds (11%) in the westbound direction, bringing the level of service during the afternoon peak to A in both directions.

The next step in this evaluation is to examine the impacts of the system once school is in session. There are three schools in close proximity to the corridor that have been observed to result in increased traffic volumes during the school year, particularly with respect to pedestrian counts. Once the impacts on specific movements have been observed and analyzed, the data will be used to develop new timing strategies and monitor the subsequent impacts. Additionally, the improvements seen in this intermediate arterial have spurred interest in planning further deployments on higher volume corridors in the region.