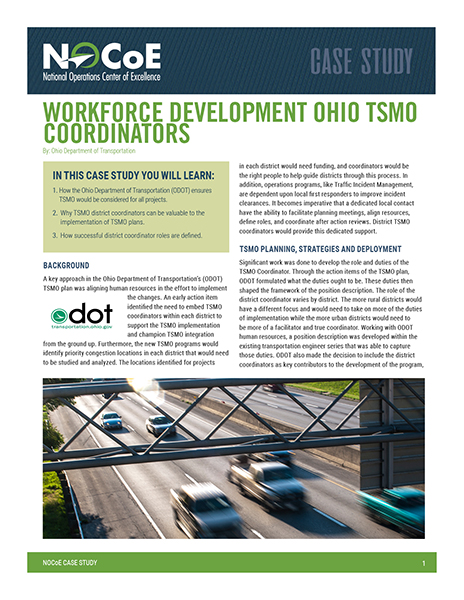 A key approach in the Ohio Department of Transportation’s (ODOT) TSMO plan was aligning Human Resources in the effort to implement the changes. An early action item identified the need to embed TSMO Coordinators within each District to support the TSMO implementation and champion TSMO integration from the ground up. Furthermore, the new TSMO programs would identify priority congestion locations in each District that would need to be studied and analyzed. The locations identified for projects in each district would need funding, and Coordinators would be the right people to help guide Districts through this process. In addition, operations programs, like Traffic Incident Management, are dependent upon local first responders to improve incident clearances. It becomes imperative that a dedicated local contact have the ability to facilitate planning meetings, align resources, define roles, and coordinate after action reviews. District TSMO Coordinators would provide this dedicated support.

Significant work was done to develop the role and duties of the TSMO Coordinator. Through the action items of the TSMO plan, ODOT formulated what the duties ought to be. These duties then shaped the framework of the position description. The role of the district coordinator varies by District. The more rural districts would have a different focus and would need to take on more of the duties as implementer while the more urban districts would need to be more of a facilitator and true coordinator. Working with ODOT Human Resources, a Position Description was developed within the existing Transportation Engineer Series that was able to capture those duties. ODOT also made the decision to include the District Coordinators as key contributors to the development of the program, and not just operate within the confines of their respective District programs. Annual program goals are generated by this group and goal ownership is assigned to each TSMO Coordinator.

The District Deputy Directors and their leadership teams had heavy involvement in implementing the new position. In general, no new positions were available to be created for this new role. District leadership had to shift resources to fill this vacancy and replace whatever position left vacant because of this shift. Once the coordinators were established, routine in-person meetings began to be conducted quarterly, and conference calls occur monthly.

The TSMO plan itself was the foundation to drive this change, as did the from Executive Leadership. All parties involved had to be flexible and getting total buy-in has been difficult. Making this type of organizational change can be challenging, but the process has moved forward successfully by having champions at the Executive level and embedded in the Districts. Most of the TSMO coordinators were shifted from Operations where they generally had a traffic background and very little planning experience. ODOT has therefore had to leverage consultant support to bridge that gap to provide meaningful studies and analyses. This has led to a collaborative learning environment that has accelerated the TSMO coordinators learning curve and led to many internal process and implementation successes already in the early implementation of the Program. For example, TSMO coordinators are now included in the Project Initiation Package (PIP) and already on several occasions, TSMO considerations have been added to other projects being developed, solely because the design project manager was obligated to discuss their project with the TSMO coordinator.