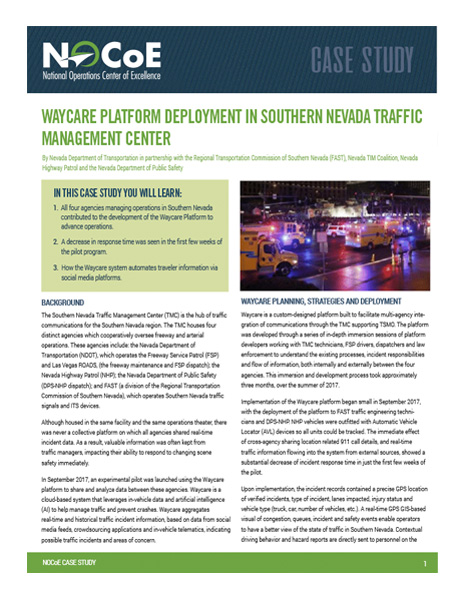 1. All four agencies managing operations in Southern Nevada contributed to the development of the Waycare Platform to advance operations.

2. A decrease in response time was seen in the first few weeks of the pilot program.

Although housed in the same facility and the same operations theater, there was never a collective platform on which all agencies shared real-time incident data. As a result, valuable information was often kept from traffic managers, impacting their ability to respond to changing scene safety immediately.

In September 2017, an experimental pilot was launched using the Waycare platform to share and analyze data between these agencies. Waycare is a cloud-based system that leverages in-vehicle data and artificial intelligence (AI) to help manage traffic and prevent crashes. Waycare aggregates real-time and historical traffic incident information, based on data from social media feeds, crowdsourcing applications and in-vehicle telematics, indicating possible traffic incidents and areas of concern.

Waycare is a custom-designed platform built to facilitate multi-agency inte­gration of communications through the TMC supporting TSMO. The platform was developed through a series of in-depth immersion sessions of platform developers working with TMC technicians, FSP drivers, dispatchers and law enforcement to understand the existing processes, incident responsibilities and flow of information, both internally and externally between the four agencies. This immersion and development process took approximately three months, over the summer of 2017.

Implementation of the Waycare platform began small in September 2017, with the deployment of the platform to FAST traffic engineering techni­cians and DPS-NHP. NHP vehicles were outfitted with Automatic Vehicle Locator (AVL) devices so all units could be tracked. The immediate effect of cross-agency sharing location related 911 call details, and real-time traffic information flowing into the system from external sources, showed a substantial decrease of incident response time in just the first few weeks of the pilot.

Upon implementation, the incident records contained a precise GPS location of verified incidents, type of incident, lanes impacted, injury status and vehicle type (truck, car, number of vehicles, etc.). A real-time GPS GIS-based visual of congestion, queues, incident and safety events enable operators to have a better view of the state of traffic in Southern Nevada. Contextual driving behavior and hazard reports are directly sent to personnel on the road enabling a faster incident response. NHP troopers are able to login to the web-based platform from their vehicle’s computers and see the active and pending incidents, along with their precise GPS locations and incident details, which reduces radio chatter. If a CCTV camera is available within the immediate vicinity of the incident, FAST techs can position the cameras to view the incident and embed a 30-second long video of the incident scene. Additionally, by providing troopers a video of the incident scene, troopers can make decisions prior to arrival on-scene regarding resources and approach methods. NHP command staff are also able to see their entire squads’ locations, to determine whether the troopers were on-scene or en route to incidents.

NDOT’s Freeway Service Patrol (FSP) vehicles were the next phase of the structured implementation process. FSP vehicles were outfitted with Automatic Vehicle Locator (AVL) devices so all vehicles can be tracked. The FSP fleet was also outfitted with tablets in their vehicles, which allow them to login into the Waycare platform. This step eliminated the need for paper forms to be completed in the field, since FSP began entering the incident data directly into their tablets and feeding it into the platform real-time for all other users, supporting the regional safe, quick clearance goals followed by FSP.

NDOT’s LVROADS dispatchers were the last phase of the structured implementation process. The LVROADS dispatchers are now able to log disabled and abandoned vehicle calls into the Waycare platform, expanding the real-time data with the troopers. Additionally, the dispatchers oversee the FSP incident calls, and track, manage and dispatch FSP based on priority.

The Nevada Traffic Incident Management (TIM) Coalition, has been actively engaged in Waycare briefings, cooperation, communications, deployment, lessons learned and future actions. Nevada’s TIM groups meet regularly and work together to identify technologies, reduce secondary crashes and travel delay, while improving safety for first responders. Prior to the platform, FAST had sent out traffic alerts to the public, via Twitter, text and email. Since the introduction of the platform, the traffic alerts are now an automated feature in the platform and traffic alert subscription via e-mail, text messaging, or Twitter has greatly increased.

Waycare has enhanced the existing Southern Nevada traffic alerts sent to the public. When Waze users post-crash information into the app, it is provided in relative real-time to the platform for verification. Once confirmed, through a one-click operation, FAST sends out traffic alerts including the exact location and impacts on the roadway, which are also pushed back into the Waze app as a “TMC- verified” crash.

The benefits of the Waycare platform include: