IN THIS CASE STUDY, YOU WILL LEARN: 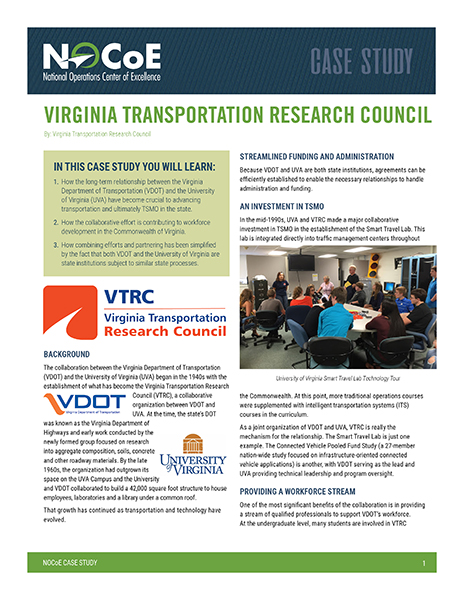 The collaboration between the Virginia Department of Transportation (VDOT) and the University of Virginia (UVA) began in the 1940s with the establishment of what has become the Virginia Transportation Research Council (VTRC), a collaborative organization between VDOT and UVA. At the time, the state’s DOT was known as the Virginia Department of Highways and early work conducted by the newly formed group focused on research into aggregate composition, soils, concrete and other roadway materials. By the late 1960s, the organization had outgrown its space on the UVA Campus and the University and VDOT collaborated to build a 42,000 square foot structure to house employees, laboratories and a library under a common roof.

That growth has continued as transportation and technology have evolved.

Because VDOT and UVA are both state institutions, agreements can be efficiently established to enable the necessary relationships to handle administration and funding.

An Investment in TSMO

In the mid-1990s, UVA and VTRC made a major collaborative investment in TSMO in the establishment of the Smart Travel Lab. This lab is integrated directly into traffic management centers throughout the Commonwealth. At this point, more traditional operations courses were supplemented with ITS courses in the curriculum.

As a joint organization of VDOT and UVA, VTRC is really the mechanism for the relationship. The Smart Travel Lab is just one example. The Connected Vehicle Pooled Fund Study (a 27-member nation-wide study focused on infrastructure-oriented connected vehicle applications) is another, with VDOT serving as the lead and UVA providing technical leadership and program oversight.

One of the most significant benefits of the collaboration is in providing a stream of qualified professionals to support BVDOT’s workforce. At the undergraduate level, many students are involved in VTRC internships during the academic year (part-time) and summer (full-time). Students from non-engineering majors including urban planning are also engaged in classes and programs. Soft skills are emphasized in the curriculum to ensure that skills translate to real-world environments, but it doesn’t stop there.

Many VDOT employees spend time at the beginning of their careers at UVA to earn their Master’s degrees and gain expertise in TSMO. In addition, VDOT and UVA have just established the E3 program to provide graduate level education for VDOT engineers (involved in TSMO and beyond).

The benefits are clear. In fact, if you look at TSMO leaders in Virginia – both in VDOT and in the private sector, many of them are graduates of UVA’s Master’s program.

With decades of history under its belt, the collaboration between UVA and VDOT has evolved in parallel with transportation technologies and strategies. On many levels, VTRC has long contributed to the Commonwealth of Virginia’s position as a transportation and TSMO leader.

As the collaboration has grown, it has also provided VDOT and Virginia’s transportation private sector with an organic pipeline of appropriately skilled practitioners.