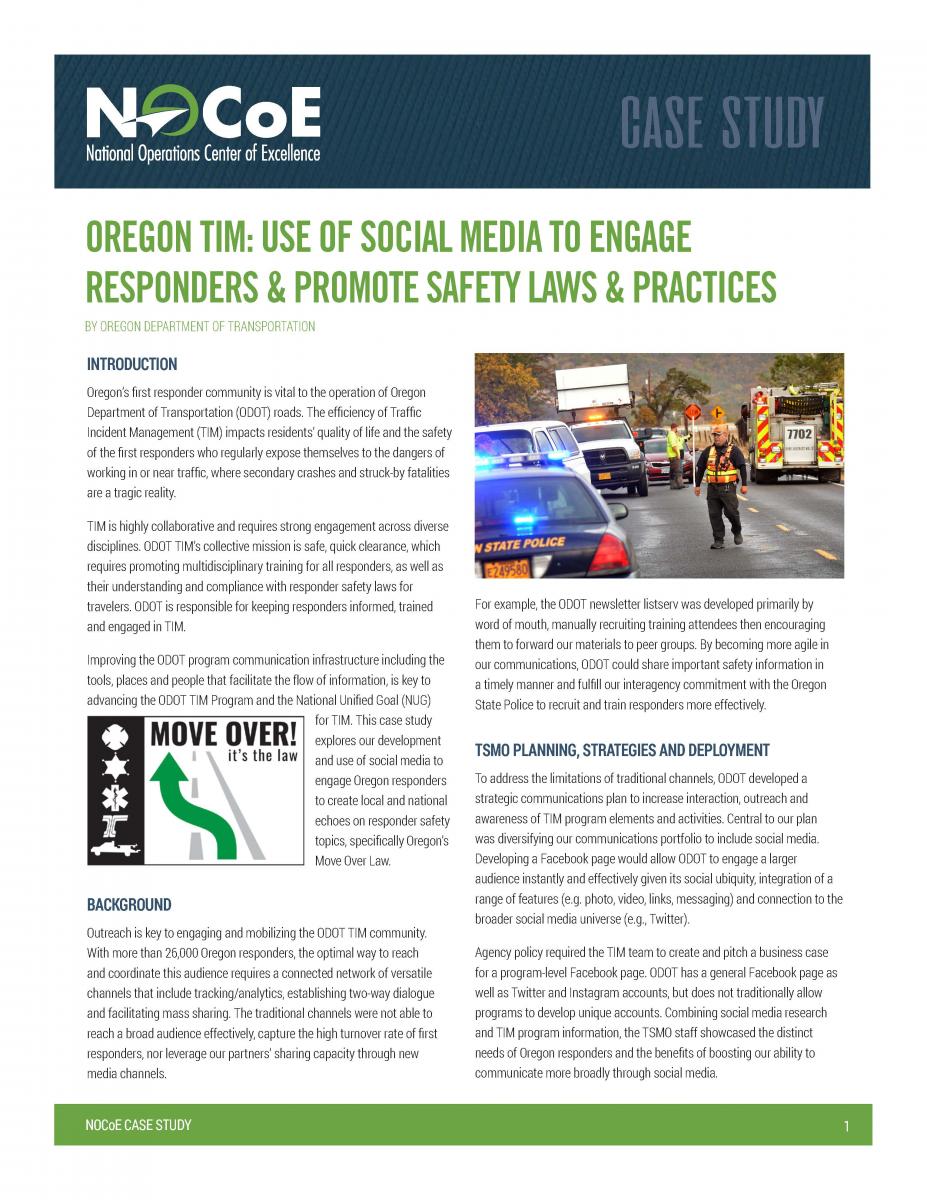 Oregon’s first responder community is vital to the operation of Oregon Department of Transportation (ODOT) roads. The efficiency of Traffic Incident Management (TIM) impacts residents’ quality of life and the safety of the first responders who regularly expose themselves to the dangers of working in or near traffic, where secondary crashes and struck-by fatalities are a tragic reality.
TIM is highly collaborative and requires strong engagement across diverse disciplines. ODOT TIM’s collective mission is safe, quick clearance, which requires promoting multidisciplinary training for all responders, as well as their understanding and compliance with responder safety laws for travelers. ODOT is responsible for keeping responders informed, trained and engaged in TIM.
Improving the ODOT program communication infrastructure including the tools, places and people that facilitate the flow of information, is key to advancing the ODOT TIM Program and the National Unified Goal (NUG) for TIM. This case study explores our development and use of social media to engage Oregon responders to create local and national echoes on responder safety topics, specifically Oregon’s Move Over Law.

Outreach is key to engaging and mobilizing the ODOT TIM community. With more than 26,000 Oregon responders, the optimal way to reach and coordinate this audience requires a connected network of versatile channels that include tracking/analytics, establishing two-way dialogue and facilitating mass sharing. The traditional channels were not able to reach a broad audience effectively, capture the high turnover rate of first responders, nor leverage our partners’ sharing capacity through new media channels.

For example, the ODOT newsletter listserv was developed primarily by word of mouth, manually recruiting training attendees then encouraging them to forward our materials to peer groups. By becoming more agile in our communications, ODOT could share important safety information in a timely manner and fulfill our interagency commitment with the Oregon State Police to recruit and train responders more effectively.

To address the limitations of traditional channels, ODOT developed a strategic communications plan to increase interaction, outreach and awareness of TIM program elements and activities. Central to our plan was diversifying our communications portfolio to include social media. Developing a Facebook page would allow ODOT to engage a larger audience instantly and effectively given its social ubiquity, integration of a range of features (e.g. photo, video, links, messaging) and connection to the broader social media universe (e.g., Twitter).

Agency policy required the TIM team to create and pitch a business case for a program-level Facebook page. ODOT has a general Facebook page as well as Twitter and Instagram accounts, but does not traditionally allow programs to develop unique accounts. Combining social media research and TIM program information, the TSMO staff showcased the distinct needs of Oregon responders and the benefits of boosting our ability to communicate more broadly through social media Upon approval, TIM staff worked closely with the ODOT Communication Section to set-up and populate the TIM page according to best practices.They developed a social media calendar and topical schedule based on a rotation of three primary categories: TIM events, information and best practices, and people and safety campaigns.

At the core of many responder deaths and injuries are drivers who are inattentive, impaired or distracted. With that in mind, ODOT recognized that effective TIM communications must:

The ODOT TIM Responders Facebook page achieves these goals by promoting TIM trainings and getting responders involved in sharing information that directly impacts safety on the job. ODOT posts scheduled trainings and tags agencies in the surrounding area to alert them to opportunities they may not hear about otherwise. In the case of responder safety, ODOT provides clear and compelling content in the form of messages, graphics, videos, etc. that responders and agencies can easily share with their networks.To date, the most successful safety campaign on the ODOT TIM Responders Facebook page was the 2017 National Move Over Day activity, during which they recruited responders to share personal messages of why they need people to move over for them. Responders’ loved ones, friends and strangers also participated, demonstrating the power of uniting the traveling public with the responders that protect them. Despite a modest following of around 300 followers at the time, ODOT reached approximately 47,900 people.

By leveraging the power of social media to communicate to TIM responders, it is easier to engage groups of people previously unreached by traditional channels. Proof of social media as a means to connect ODOT with TIM responders is in the success of safety campaigns that empower people to get involved in the message.

The ODOT TIM Responders Facebook page has been successful based on some of the following data and outcomes: