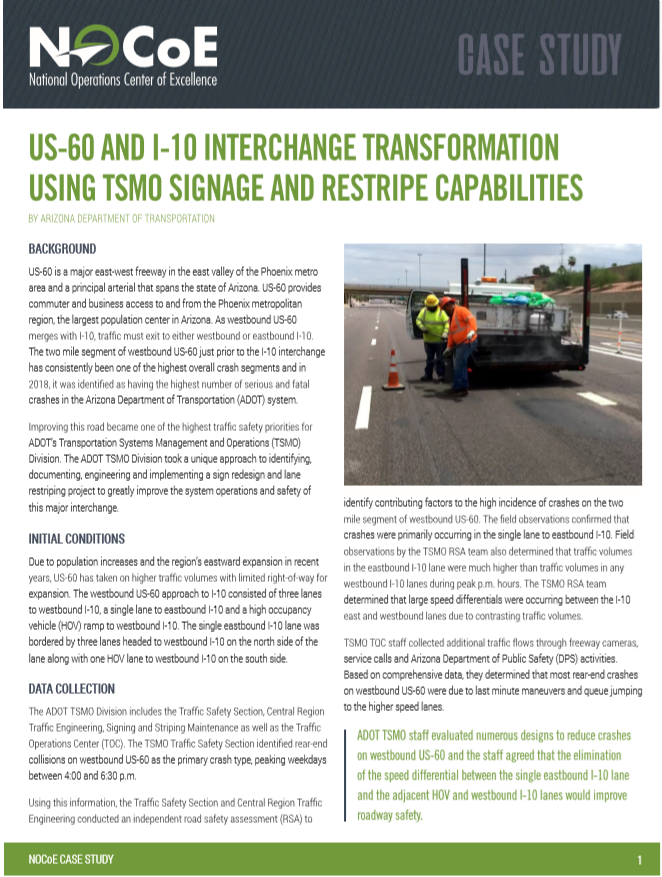 US-60 is a major east-west freeway in the east valley of the Phoenix metro area and a principal arterial that spans the state of Arizona. US-60 provides commuter and business access to and from the Phoenix metropolitan region, the largest population center in Arizona. As westbound US-60 merges with I-10, traffic must exit to either westbound or eastbound I-10. The two mile segment of westbound US-60 just prior to the I-10 interchange has consistently been one of the highest overall crash segments and in 2018, it was identified as having the highest number of serious and fatal crashes in the Arizona Department of Transportation (ADOT) system.
Improving this road became one of the highest traffic safety priorities for ADOT’s Transportation Systems Management and Operations (TSMO) Division. The ADOT TSMO Division took a unique approach to identifying, documenting, engineering and implementing a sign redesign and lane restriping project to greatly improve the system operations and safety of this major interchange.

The ADOT TSMO Division includes the Traffic Safety Section, Central Region Traffic Engineering, Signing and Striping Maintenance as well as the Traffic Operations Center (TOC). The TSMO Traffic Safety Section identified rear-end collisions on westbound US-60 as the primary crash type, peaking weekdays between 4:00 and 6:30 p.m.
Using this information, the Traffic Safety Section and Central Region Traffic Engineering conducted an independent road safety assessment (RSA) to identify contributing factors to the high incidence of crashes on the two mile segment of westbound US-60. The field observations confirmed that crashes were primarily occurring in the single lane to eastbound I-10. Field observations by the TSMO RSA team also determined that traffic volumes in the eastbound I-10 lane were much higher than traffic volumes in any westbound I-10 lanes during peak p.m. hours. The TSMO RSA team determined that large speed differentials were occurring between the I-10 east and westbound lanes due to contrasting traffic volumes.TSMO TOC staff collected additional traffic flows through freeway cameras, service calls and Arizona Department of Public Safety (DPS) activities. Based on comprehensive data, they determined that most rear-end crashes on westbound US-60 were due to last minute maneuvers and queue jumping to the higher speed lanes.

ADOT TSMO staff evaluated numerous designs to reduce crashes on westbound US-60 and the staff agreed that the elimination of the speed differential between the single eastbound I-10 lane and the adjacent HOV and westbound I-10 lanes would improve roadway safety.

TSMO staff evaluated the existing flyover ramp width to eastbound I-10 and identified an opportunity to add a second lane to increase capacity toward eastbound I-10. The road redesign would result in a conversion of one dedicated westbound I-10 lane to a shared lane toward both westbound and eastbound I-10.
TSMO staff worked with the ADOT Traffic Design staff to develop drawings for stripe and sign changes. The road redesign also required reduced lane widths, reduced shoulder widths and a lower ramp advisory speed through a design exception process with the Federal Highway Administration (FHWA). TSMO staff used Performance Based Project Design (PBPD) to write the design exception report that was approved by FHWA for the I-10 interchange. Upon approval of the road redesign, overhead lane designation signs were fabricated and prepared for installation by the TSMO Interstate Sign Shop.

TSMO staff closed westbound US-60 within the vicinity of the project to I-10 on the weekend of July 13-15, 2018 to implement the sign and stripe changes. Internal maintenance staff and on-call contractors worked around the clock to remove existing striping, install new striping and replace overhead lane designation, curve warning and advisory speed signs along the westbound US-60 project vicinity.
Prior to reopening westbound US-60, TSMO staff conducted driving tests at various speeds to confirm the road redesign would be acceptable and safe for the public. Upon completion of the driving tests, US-60 reopened with the new traffic pattern in time for peak traffic on Monday morning.

The effects of the westbound US-60 redesign were seen immediately. On the first day using TOC cameras, TSMO staff confirmed that there were no longer backups in the original eastbound I-10 lane during peak p.m. hours and that traffic speeds were similar across all lanes. Public feedback was positive and drivers commented on social media that congestion and crashes were reduced.

Preliminary data comparing the two months prior, with two months after the project, indicate there has been an approximate 70% reduction in crashes overall and an 87% reduction of crashes during peak p.m. weekday hours on westbound US-60.

The installation of the westbound US-60 redesign is producing a benefit/ cost analysis of over 850 to 1 based only on crash reduction data which doesn’t include first responder or Department of Public Safety costs.
ADOT TSMO staff have determined the westbound US-60 redesign to be a success to both operations and safety based on preliminary data and user feedback. ADOT TSMO staff will continue to monitor and collect data on westbound US-60. The US-60 and I-10 interchange transformation using TSMO signage and restripe capabilities is an example of TSMO being applied to reduce congestion and crashes using internal resources at minimal expense and without a costly expansion project.