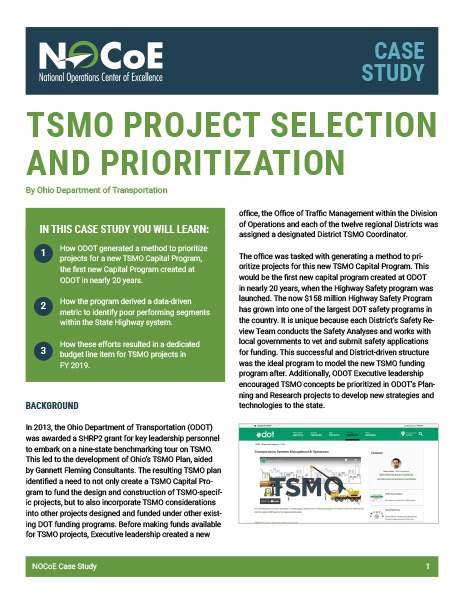 In 2013, the Ohio Department of Transportation (ODOT) was awarded a SHRP2 grant for key leadership personnel to embark on a nine-state benchmarking tour on TSMO. This led to the development of Ohio’s TSMO Plan, aided by Gannett Fleming Consultants. The resulting TSMO plan identified a need to not only create a TSMO Capital Program to fund the design and construction of TSMO-specific projects, but to also incorporate TSMO considerations into other projects designed and funded under other existing DOT funding programs. Before making funds available for TSMO projects, Executive leadership created a new office, the Office of Traffic Management within the Division of Operations and each of the twelve regional Districts was assigned a designated District TSMO Coordinator.

The office was tasked with generating a method to prioritize projects for this new TSMO Capital Program. This would be the first new capital program created at ODOT in nearly 20 years, when the Highway Safety program was launched. The now $158 million Highway Safety Program has grown into one of the largest DOT safety programs in the country. It is unique because each District's Safety Review Team conducts the Safety Analyses and works with local governments to vet and submit safety applications for funding. This successful and District-driven structure was the ideal program to model the new TSMO funding program after. Additionally, ODOT Executive leadership encouraged TSMO concepts be prioritized in ODOT's Planning and Research projects to develop new strategies and technologies to the state.

The first task in developing the prioritization necessary for a new funding program was deriving a data-driven metric to identify poor performing segments within the State Highway system. In 2018 ODOT released its first annual Transportation Operations Assessment System Tool (TOAST); the Congestion version of the Highway Safety Maps. TOAST scores each roadway segment on Travel Time Performance, Bottlenecks, Incident Clearance Time, Secondary Crashes, Volume per Lane, Freight, and Safety Performance. With the poor performing segments and corridors identified and ranked, the District TSMO Coordinator can take a deeper dive into their problems and potential countermeasures. Given that nearly all of the District TSMO Coordinators did not come from a planning or design background, ODOT, consulted by Gannett Fleming, created the TSMO Guidebook. Modeled after an abbreviated Highway Safety Study, the Guidebook provides guidance on how to perform a TSMO study along with example studies, and a guide to reference problems with an appropriate countermeasure. Additionally, each countermeasure lists the typical Benefit-Cost range for TSMO treatments most likely to be utilized in Ohio.

The next stage in the development to prioritize funding for TSMO projects was to come up with a process to review and prioritize applications for funding. Along with half of the District TSMO Coordinators, each application is vetted by a committee of diverse, creative, and divergent leaders from various disciplines within ODOT, representing the Offices of Traffic Management, Traffic Operations, Roadway Engineering, Environmental Services, Construction Alternative Delivery, and the Highway Safety Program.

To ensure TSMO concepts have been considered and vetted for each project, including those that might not be targeting TSMO funding, it was practical to engage the District TSMO Coordinator in the earliest stages of project development. The ODOT Project Initiation Package (PIP), was modified to require review and approval of the TSMO Coordinator as the TSMO Subject Matter Expert, along with the other respective discipline's expert before advancing the project development process. To further factor in TSMO prioritization to other funding programs, TSMO is incorporated into the scoring process of some other programs. For example ODOT’s TRAC program, which is the council of external stakeholders who prioritize major projects, utilize TOAST scores as a tie-breaker in their selection of projects. ODOT's Statewide Planning and Research Program prioritizes research requests that are directly related to ODOT's TSMO and Smart Mobility efforts.

To develop ODOT's selection process, the Office of Traffic Management's TSMO Capital Program manager was seated as a member of the Highway Safety Application Scoring Committee to better understand the process and include TSMO-expertise within those project application's discussions. The project to develop the TSMO Guidebook created a Technical Advisory committee of diverse DOT employees from various disciplines. Several workshops were held to develop the core product thought the life of the project. This guidebook also serves as a reference manual for Consultant Engineering firms conducting TSMO studies on ODOT's behalf.

To market the success of TSMO projects, the Office of Traffic Management is creating a project- specific case study infographic demonstrating the benefits of such implementations. These case studies are designed for an audience of Executive Management, locals, and the general public to justify and garner support for the next project or program and to demonstrate the value being returned to the public through optimizing our existing assets. The most efficient way to incorporate the procedural changes within the regions to involve the District TSMO Coordinators was to modify Policies and SOPs. For example, The Highway Safety Manual names the TSMO Coordinator as a signing-member of each District Safety Review Team. They are also included as reviewers on the PIP document. Making the change at the policy level directed this important role to be included as new members within existing, long-standing processes and workflows. Having this penetration at the grass roots level accelerated ODOT's adopting and embracing a TSMO culture throughout the agency.

Fiscal Year 2019 was the first in which ODOT had a dedicated line item for TSMO projects. The program was granted $5 million dollars of state money in each of the first two years to award to TSMO projects and items of work. The program has funded various projects and items of work on other projects including CCTV on spot locations, Performance Based Practical Design lane reconfiguration, fiber, smart mobility, System Engineering Analyses, and corridor-based signal performance measures along with funding various consultant led TSMO Studies.

The Capital funding process was tested fully in January of 2020. The District 8 TSMO Coordinator presented an application to the TSMO funding committee for I-275, east of Cincinnati proposing a bi-directional shoulder widening on an upcoming resurfacing job within the same project limits. This stretch of roadway has been problematic for years and is one of the District's lowest scoring TOAST sections. This corridor is one identified in the statewide ATDM feasibility study as a potential location for treatment. The District had been seeking a Federal grant to fund $100 million to construct a part time Hard Shoulder Running with Variable Speed Limit countermeasure in both directions of the 11-mile corridor. After the presentation to the Committee, ODOT quickly took a deeper dive with the data immediately available and ran an Inrix Bottleneck and Congestion scan of the corridor during the meeting. The analysis showed that a 6mile westbound leg of the corridor had the largest recurring bottleneck and resulting congestion. The committee counter-proposed investigating a simple HSR with a simple over-head lane control sign over the shoulder through this particular section in addition to the shoulder-widening in this section. After further study, this section is currently scheduled to advertise as a Design Build in FY2021. This is an example of what TSMO means to ODOT, including lower cost, and quick implementations to solve problems. Had the Committee not proposed this along with the District's quick work in response, this project would still be seeking funds for the entire corridor solution. It could easily be another 10 years before it is constructed, but now, the worst bottleneck will be resolved within 2 years.

Although the $5 million TSMO Capital budget does not go very far in the modern transportation world, Districts are encouraged to continue to perform studies and develop "a bench of projects" so that the Executive Team and Funding Council can see the demand for additional funds is justified. This coupled with benefits and results demonstrated by other projects currently in construction as demonstrated helps move TSMO implementation forward.