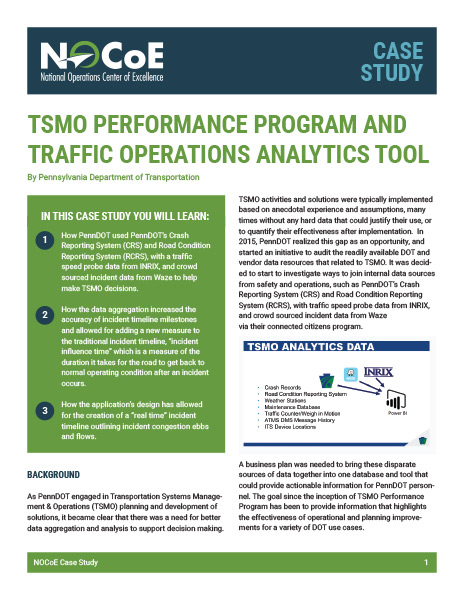 As PennDOT engaged in Transportation Systems Management & Operations (TSMO) planning and development of solutions, it became clear that there was a need for better data aggregation and analysis to support decision making. TSMO activities and solutions were typically implemented based on anecdotal experience and assumptions, many times without any hard data that could justify their use, or to quantify their effectiveness after implementation. In 2015, PennDOT realized this gap as an opportunity, and started an initiative to audit the readily available DOT and vendor data resources that related to TSMO. It was decided to start to investigate ways to join internal data sources from safety and operations, such as PennDOT’s Crash Reporting System (CRS) and Road Condition Reporting System (RCRS), with traffic speed probe data from INRIX, and crowd sourced incident data from Waze via their connected citizens program.

A business plan was needed to bring these disparate sources of data together into one database and tool that could provide actionable information for PennDOT personnel. The goal since the inception of TSMO Performance Program has been to provide information that highlights the effectiveness of operational and planning improvements for a variety of DOT use cases.

In response to this need, PennDOT’s Traffic Systems and Performance Unit worked in concert with PennDOT’s Data Management and Analytics team to identify internal data scientists, data storage infrastructure, and available PennDOT software to house the Traffic Operations Analytics (TOA) platform. Requirements were gathered, and the initial system was developed and deployed in late 2017. The design for the first Traffic Operations Analytics report was built in Microsoft Power BI and focused on FHWA’s EDC- 4 reporting requirements for incident clearance times. Rather than relying solely on incident data entered by Traffic Management Center personnel, PennDOT combined situational data sources to more accurately delineate when incidents truly occurred, how long it took them to be cleared, and what their overall impact on traffic was. The Incident Timeline module incorporates 4 data sources including three sources for incident data (RCRS, CRS, and Waze) as well as speed data from INRIX. Events from all 4 systems are then correlated geographically within timeframes to outline incident timeline milestones.

The outcomes from joining the road speed data increased the accuracy of incident timeline milestones and allowed for adding a new measure to the traditional incident timeline - “incident influence time”. This incident influence time is the duration it takes for the road to get back to normal operating condition after the incident occurs. The success of the first Incident Timeline module, has allowed TOA to expand to new datasets and a continually growing 40+ terabyte TSMO database. The system currently makes use of the following data sources:

These datasets have allowed the TSMO Performance Program to branch out to DOT initiatives traditionally outside of the traffic operations purview. Most notably, Pennsylvania’s first congestion pie chart was calculated from actual traffic data. This information provides Engineering Districts and Planning partners a scalable tool to analyze congestion causes on a statewide, regional, District, county, municipality, or route level. The TSMO Performance Program has been tasked to develop a COVID- 19 fuel tax revenue projection model to assist executive leadership planning, as well as an enhanced safety analysis to quantify where and when high risk crashes were occurring in existing congestion. The outcomes from this safety analysis will serve as the basis for ITS device deployment locations during construction projects utilizing smart work z one concepts, and improve TMC incident response guidance to reduce secondary crashes.

PennDOT’s TSMO Performance Program periodically publishes performance reports outlining key efforts to internal and external stakeholders. The goal of each TSMO Performance Report is to provide data that allows for actionable decisions. After each report is released a core team of DOT personnel receive a presentation covering all contents directly from the creators. This allows an opportunity for these key individuals to TSMO to ask questions, provide feedback, and inquire about new performance initiatives. Overall, transparency is key, and report content methodology is footnoted to help readers understand and trust what they are interpreting. Performance reports can be viewed externally on PennDOT’s TSMO webpage at: www.penndot.gov/ProjectAndPrograms/operations

One of the earliest key findings utilizing the TOA platform was that crowd sourced data from Waze and INRIX detected 86.7% of reportable crashes on PennDOT’s core roadway network. This was significantly more than what TMC operators were detecting through traditional methods. These sources also, on average, detected incidents 35- 50% more quickly than TMC traditional methods. These outcomes validated the data and led to the internal development of a “Traffic Alerts” crowd-sourced incident application.

Traffic Alerts displays INRIX and Waze incident data to TMC operators as it’s received and stores each associated update. Subsequently, increased the accuracy of incident timeline milestones and allowed for adding a new measure to the traditional incident timeline - “incident influence time”. This incident influence time is the duration it takes for the road to get back to normal operating condition after the incident occurs.

The release of the congestion pie chart in January 2020 was particularly significant, as this allows planning partners and DOT personnel to better understand the nature of congestion in their region or corridor, and better tailor their TSMO solutions to meet those needs. The congestion pie charts have been incorporated in Regional Operations Plans (ROP) throughout Pennsylvania.

A safety study of crashes that occurred in existing congestion discovered an overrepresented number of secondary crashes (1122 in 2019) and work zone congestion crashes (924). These crashes were found to cause more injuries to motorists than other types of crashes on average, many times as a result of vehicles running into the back of a queue. The location of these crashes was of particular interest, with 32% of work zone crashes and 49% of secondary crashes occurring more than 2 miles back from the origin point of congestion. 46% of secondary crashes occurred more than an hour after the primary crash, and 90% of these crashes had DMS near enough to the crash to alert travelers who were approaching the queue. This information will be used to build safer automated smart work zones and queue protection corridors deployments in the field.