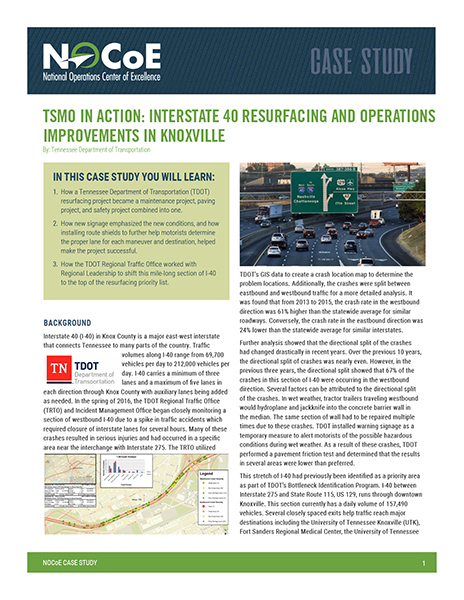 Interstate 40 (I-40) in Knox County is a major east-west interstate that connects Tennessee to many parts of the country. Traffic volumes along I-40 range from 69,700 vehicles per day to 212,000 vehicles per day. I-40 carries a minimum of three lanes and a maximum of five lanes in each direction through Knox County with auxiliary lanes being added as needed. In the spring of 2016, the TDOT Regional Traffic Office (TRTO) and Incident Management Office began closely monitoring a section of westbound I-40 due to a spike in traffic accidents which required closure of interstate lanes for several hours. Many of these crashes resulted in serious injuries and had occurred in a specific area near the interchange with Interstate 275. The TRTO utilized TDOT’s GIS data to create a crash location map to determine the problem locations. Additionally, the crashes were split between eastbound and westbound traffic for a more detailed analysis. It was found that from 2013 to 2015, the crash rate in the westbound direction was 61% higher than the statewide average for similar roadways. Conversely, the crash rate in the eastbound direction was 24% lower than the statewide average for similar interstates.

This stretch of I-40 had previously been identified as a priority area as part of TDOT’s Bottleneck Identification Program. I-40 between Interstate 275 and State Route 115, US 129, runs through downtown Knoxville. This section currently has a daily volume of 157,490 vehicles. Several closely spaced exits help traffic reach major destinations including the University of Tennessee Knoxville (UTK), Fort Sanders Regional Medical Center, the University of Tennessee Medical Center, and the McGhee Tyson Airport. Due to the closely spaced exits through this section and lane balance near the next major interchange, reoccurring congestion was a noted factor in the area. Congestion would often stretch for several miles during peak times when approaching this downtown section.

As this area had been previously located as part of the Bottleneck Identification Program, the TRTO had been deliberating various methods to relieve congestion in this area. These methods involved high cost, high impact construction including elevated sections of interstate. When the wet weather crashes began occurring on a more frequent basis, a more accessible solution was sought. This area was scheduled to be resurfaced in the next few years. The TRTO used this opportunity to begin developing several low-cost options that could be implemented during the resurfacing project to help relieve congestion.

Each option would change the existing striping and signage only ensuring that all proposed changes were contained within the existing footprint of the roadway. The existing closely spaced exits contained weaving sections that included lane drops. The existing conditions contained 23 conflict points where vehicles would enter another lane while making a maneuver. When the Regional Incident Management Office alerted the TRTO to the constant wet weather crashes in this area, a push was made to finalize a plan that would improve operations with a resurfacing project. The plan changed the drop exit lanes to option lanes and extended the weaving section.

Included in this plan was new signage to emphasize the new conditions and installing route shields to further help motorists determine the proper lane for each maneuver and destination. The proposed configuration also reduced the conflict points down to 16. Additionally, an open grade friction course was utilized to help disperse water from the surface of the roadway. This type of pavement has larger voids on the surface layer which allows water to drain through the surface before reaching an impermeable layer. The water follows this impermeable layer to the shoulder where it is released away from traffic. With the data gathered and plan developed, the TRTO worked with regional leadership to shift this mile-long section of I-40 to the top of the resurfacing priority list and the contract was awarded in June 2016 with the work being completed in October 2016. From the initial planning stages to the final construction, less than a year of time had passed before these improvements could be implemented. Additionally, the TRTO utilized a separate on- call sign contract to install the new signage. This allowed for a savings on the overall cost of the resurfacing project.

Communications within TDOT were vital for this project to be successful in such a short time span. From the Regional Incident Management Office notifying the TRTO of the sudden increase in crashes to regional leadership pushing this proposed improvement to the top of the list, there were a good deal of partners involved in making this happen. The various TDOT offices involved were:

Each played an integral role in gathering data, utilizing the data, creating the design plans, allocating the project funds, and administering the contract. Without the tremendous work from each of these offices, this project would not have been able to make the impact it had within the accelerated time frame.

Before the implementation, the TRTO contacted transportation engineering professors at UTK to discuss whether they could help use TDOT’s radar data to chart the most congested areas near the downtown portion of I-40. TDOT has many radar units along interstates in order to measure speed and volume. UTK was able to aggregate data from 12 radar units to prepare 21 maps. These charts show where in the corridor reoccurring congestion begins and where it ends in addition to the times that it is at its worst. The aggregated data shows that on a typical day the project location experiences less congestion. A crash analysis of the two years following the project also shows improvements. Overall crashes in the westbound direction have decreased by 36.8% as compared to the three years prior to the project. Additionally, shortly after the changes were made, TDOT was contacted by local news organizations regarding the new pavement shields they had seen. Regional Traffic Engineer, Nathan Vatter, discussed the changes with KnoxNews. The article showcased the changes including the new signs and shields on the pavement. One of the biggest takeaways is that this project was a maintenance project, paving project, and safety project combined into one. Overall this project was completed for a total of $2.3 million with $100,000 going towards the new signs.