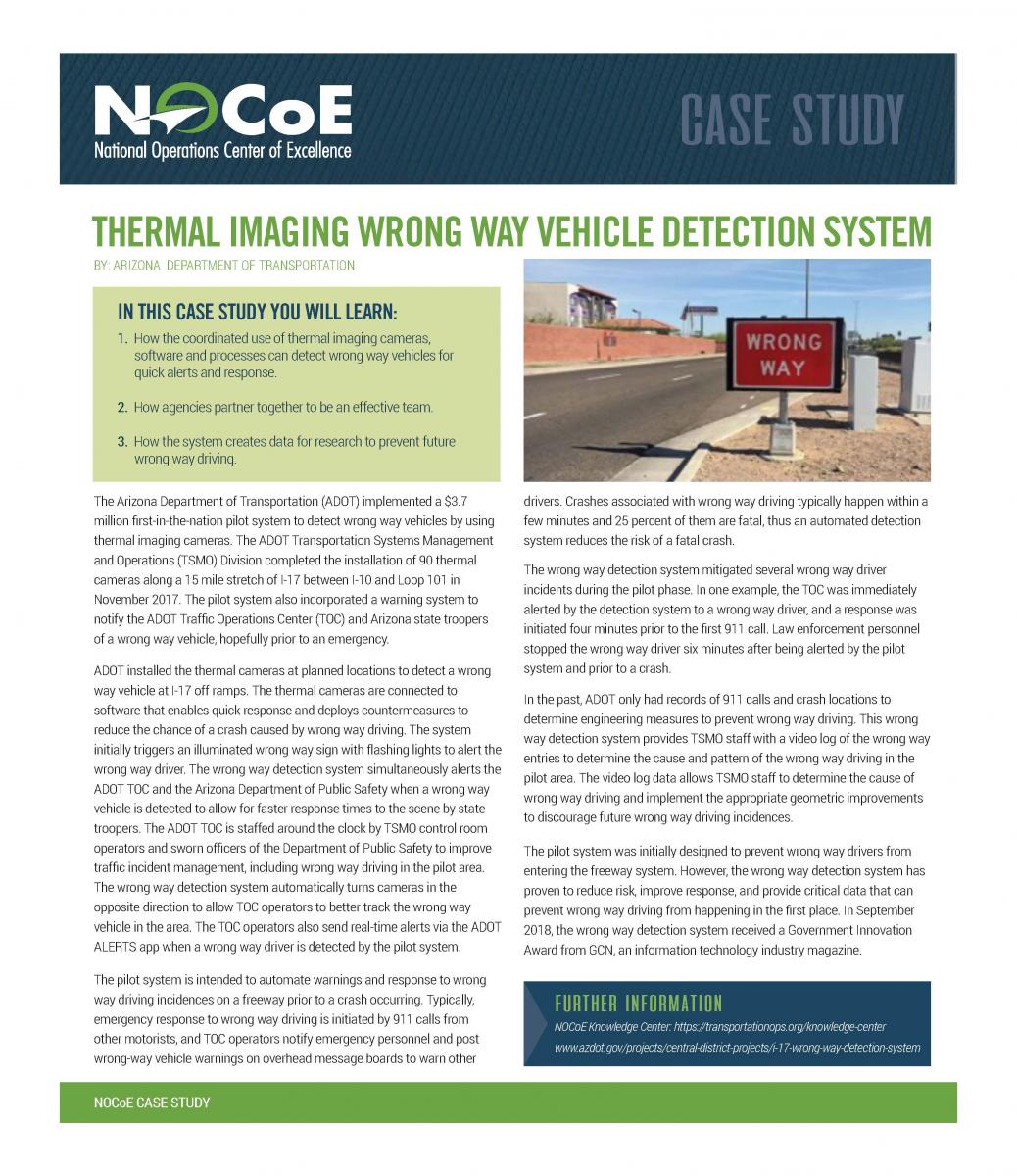 The Arizona Department of Transportation (ADOT) implemented a $3.7 million first-in-the-nation pilot system to detect wrong way vehicles by using thermal imaging cameras. The ADOT Transportation Systems Management and Operations (TSMO) Division completed the installation of 90 thermal cameras along a 15 mile stretch of I-17 between I-10 and Loop 101 in November 2017. The pilot system also incorporated a warning system to notify the ADOT Traffic Operations Center (TOC) and Arizona state troopers of a wrong way vehicle, hopefully prior to an emergency.

ADOT installed the thermal cameras at planned locations to detect a wrong way vehicle at I-17 off ramps. The thermal cameras are connected to software that enables quick response and deploys countermeasures to reduce the chance of a crash caused by wrong way driving. The system initially triggers an illuminated wrong way sign with flashing lights to alert the wrong way driver. The wrong way detection system simultaneously alerts the ADOT TOC and the Arizona Department of Public Safety when a wrong way vehicle is detected to allow for faster response times to the scene by state troopers. The ADOT TOC is staffed around the clock by TSMO control room operators and sworn officers of the Department of Public Safety to improve traffic incident management, including wrong way driving in the pilot area. The wrong way detection system automatically turns cameras in the opposite direction to allow TOC operators to better track the wrong way vehicle in the area. The TOC operators also send real-time alerts via the ADOT ALERTS app when a wrong way driver is detected by the pilot system.

The pilot system is intended to automate warnings and response to wrong way driving incidences on a freeway prior to a crash occurring. Typically, emergency response to wrong way driving is initiated by 911 calls from other motorists, and TOC operators notify emergency personnel and post wrong-way vehicle warnings on overhead message boards to warn other drivers. Crashes associated with wrong way driving typically happen within a few minutes and 25 percent of them are fatal, thus an automated detection system reduces the risk of a fatal crash.