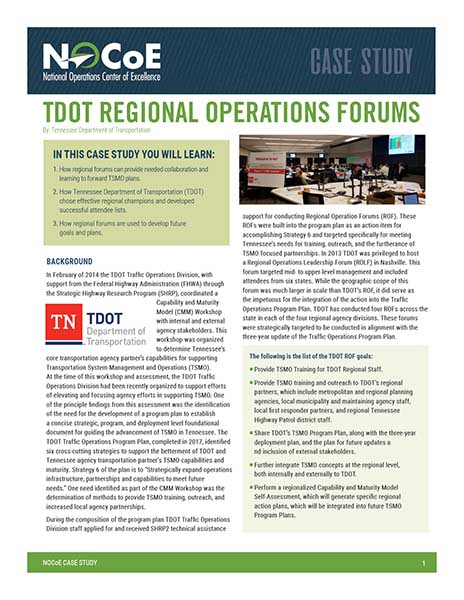 In February of 2014 the TDOT Traffic Operations Division, with support from the Federal Highway Administration (FHWA) through the Strategic Highway Research Program (SHRP), coordinated a Capability and Maturity Model (CMM) Workshop with internal and external agency stakeholders. This workshop was organized to determine Tennessee’s core transportation agency partner’s capabilities for supporting Transportation System Management and Operations (TSMO). At the time of this workshop and assessment, the TDOT Traffic Operations Division had been recently organized to support efforts of elevating and focusing agency efforts in supporting TSMO. One of the principle findings from this assessment was the identification of the need for the development of a program plan to establish a concise strategic, program, and deployment level foundational document for guiding the advancement of TSMO in Tennessee. The TDOT Traffic Operations Program Plan, completed in 2017, identified six cross-cutting strategies to support the betterment of TDOT and Tennessee agency transportation partner’s TSMO capabilities and maturity. Strategy 6 of the plan is to “Strategically expand operations infrastructure, partnerships and capabilities to meet future needs.” One need identified as part of the CMM Workshop was the determination of methods to provide TSMO training, outreach, and increased local agency partnerships.

During the composition of the program plan TDOT Traffic Operations Division staff applied for and received SHRP2 technical assistance support for conducting Regional Operation Forums (ROF). These ROFs were built into the program plan as an action item for accomplishing Strategy 6 and targeted specifically for meeting Tennessee’s needs for training, outreach, and the furtherance of TSMO focused partnerships. In 2013 TDOT was privileged to host a Regional Operations Leadership Forum (ROLF) in Nashville. This forum targeted mid- to upper-level management and included attendees from six states. While the geographic scope of this forum was much larger in scale than TDOT’s ROF, it did serve as the impetuous for the integration of the action into the Traffic Operations Program Plan. TDOT has conducted four ROFs across the state in each of the four regional agency divisions. These forums were strategically targeted to be conducted in alignment with the three-year update of the Traffic Operations Program Plan.

The following is the list of the TDOT ROF goals:

The implementation process of the four TDOT ROFs was supported by staff from TDOT, FHWA, and consultant services provided by HDR. The TDOT implementation team included representatives from Traffic Operations, Multimodal, Long Range Planning, and the four region offices. The FHWA team included staff from both the local FHWA Division office and Resource Center. Leveraging an existing on-call engineering services contract with HDR, TDOT initiated a work order to provide support for planning, material preparation, onsite logistics, forum facilitation, and results documentation. Early in the planning process it was realized that the success of the TDOT ROFs would depend greatly on the buy in and active support from the TDOT Regions. This determination established the first step of identifying champions in leadership positions that would have both the authority and respect of regional staff. This process was aided by TDOT’s participation in the AASHTO/FHWA pilot Regional Operations Leadership Forum that was held in Atlanta, GA in April of 2018. TDOT strategically selected leaders from each region to attend this forum, whose content and duration was comparable to what was currently being envisioned for the TDOT ROFs. These regional leaders came back from Atlanta supercharged for TSMO and took an active role in implementation of the ROFs.

Through the support of HDR and the by-weekly calls, course curriculum was assembled and reviewed from I-95 Corridor Coalition’s Operations Academy, previously held Regional Operations Forums, the ITS Heartland TSMO University, and the before mentioned pilot Regional Operations Leadership Forum. The TDOT ROFs content was tailored to fit into a 2.5 day in-person interactive workshop. The development of the forum attendee list was tasked to the region leadership team members. The invitee lists included regional planning agency staff, local agency leadership, state and local law enforcement agencies, local first responder partners, TDOT regional leadership from Project Development and Design, Operations, and Planning, and peer state guest presenters. The regional leadership team members also took the lead in determining ROF site locations and working with the consultant on event date logistics. Peer state presenters were added to the program to provide an outside perspective on TSMO. Peer state presenters came from Maryland, Georgia, Florida, and Pennsylvania. The first TDOT ROF took place in the City of Knoxville on December 4-6, 2018, followed by the second in Memphis on March 12-14, 2018, the third in Chattanooga on April 2-4, 2019, and lastly in Nashville on May 21-23, 2019. Each session was conducted with 11 interactive modules ranging from the basics of TSMO to more advanced topics like performance management. Automated surveys were performed periodically to ensure attendee engagement and to solicit ideas for improvement. The end of the forums concluded with a facilitated regional level CMM self-assessment followed by the development of specific action items.

The communications process for the TDOT ROFs was organized and executed by the project team. The regional leadership team members leveraged a recorded commissioner video and director level outreach for internal TDOT participation, as well as presentations given at the TDOT Operations Symposium in the fall of 2018. External stakeholder participation outreach was conducted with the use of save the date flyers and targeted direct contact to regional partners. This process was effective due to the buy in from TDOT’s regional leadership.

The TDOT ROFs have served as a platform for the promotion, refinement and future development of the TDOT Traffic Operations Program Plan. The conversation and information collected during the four ROFs have been documented in four regional reports and are currently being utilized to prepare the next update of the program plan. TDOT has built in the ROF as a process that will be utilized every three years during plan updates. The TDOT ROFs have stimulated the maturation of relationships with local partners across Tennessee. The Traffic Operations Division and regional leadership have planned follow up meetings with attendees and identified the need for targeted outreach to those who weren’t in the room. The two lowest rated levels from the TDOT lead 2014 CMM Workshop were Planning and Program (1.5), and Collaboration (1.5). The ROFs have directly helped to support these dimensions of capability, and it is expected that our next self-assessment will show an increase in these levels.

The inclusion and participation of local maintaining agencies in the TDOT ROFs was a timely benefit in Tennessee due to TDOT’s increased focus on traffic signal operations. By law in Tennessee, TDOT does not own or operate traffic signals. With ongoing projects like the I-24 Smart Corridor in Nashville, the need for effective arterial operations has come to the forefront. TDOT is pursuing other ICM projects on congested urban corridors in Tennessee where the relationships with these local agencies will be crucial for successful deployments. The Nashville ROF featured a traffic signal operators panel discussion where the cities represented presented on challenges related to the operations of these system. The process of conducting the TDOT ROFs sequentially across the state allowed improvements to be made after each event. The Knoxville forum led to changes in event space decisions for the remaining three. The Knoxville forum was held in TDOT’s Region 1 facilities. Because of this, TDOT participants from Region 1 were easily temped to return to their offices to check on day to day work tasks. It is for this reason that all future TDOT ROFs were conducted at an offsite location. Another lesson learned during the forums was the realization that no matter how much outreach and planning effort was put into developing a list of the right attendees, there is always agencies, stakeholders and contacts that you determine during the forum that should have been included. For this reason, a list was developed by attendees at each forum of regional stakeholders not present that should to be included for future TSMO outreach activities.