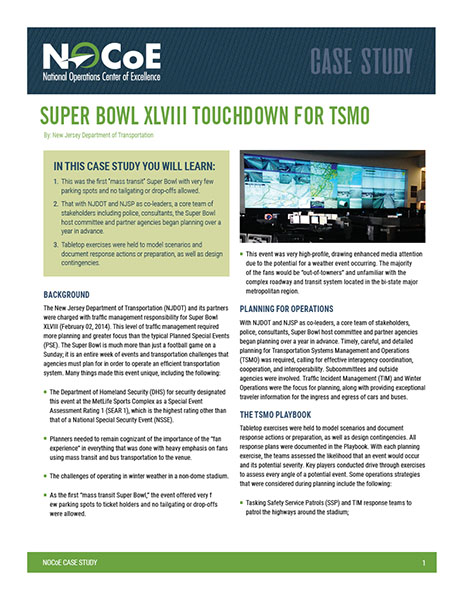 1. This was the first “mass transit” Super Bowl with very few parking spots and no tailgating or drop-offs allowed.

2. That with NJDOT and NJSP as co-leaders, a core team of stakeholders including police, consultants, the Super Bowl host committee and partner agencies began planning over a year in advance.

3. Tabletop exercises were held to model scenarios and document response actions or preparation, as well as design contingencies.

The New Jersey Department of Transportation (NJDOT) and its partners were charged with traffic management responsibility for Super Bowl XLVIII (February 02, 2014). This level of traffi c management required more planning and greater focus than the typical Planned Special Events (PSE). The Super Bowl is much more than just a football game on a Sunday; it is an entire week of events and transportation challenges that agencies must plan for in order to operate an efficient transportation system. Many things made this event unique, including the following:

With NJDOT and NJSP as co-leaders, a core team of stakeholders, police, consultants, Super Bowl host committee and partner agencies began planning over a year in advance. Timely, careful, and detailed planning for Transportation Systems Management and Operations (TSMO) was required, calling for effective interagency coordination, cooperation, and interoperability. Subcommittees and outside agencies were involved. Traffi c Incident Management (TIM) and Winter Operations were the focus for planning, along with providing exceptional traveler information for the ingress and egress of cars and buses.

Tabletop exercises were held to model scenarios and document response actions or preparation, as well as design contingencies. All response plans were documented in the Playbook. With each planning exercise, the teams assessed the likelihood that an event would occur and its potential severity. Key players conducted drive through exercises to assess every angle of a potential event. Some operations strategies that were considered during planning include the following:

Additional agencies also had access to the channel for use as a back up to other communication types such as cell phones.

The lessons learned and collaborative networking will benefit the region’s transportation operations for years to come, in connection with not only planned special events but also daily operations, communication with travelers, and incident management. Specific lessons learned by this team include the following:

Also, do not introduce a new technology (or software) unless there is adequate time to properly train staff on its use.