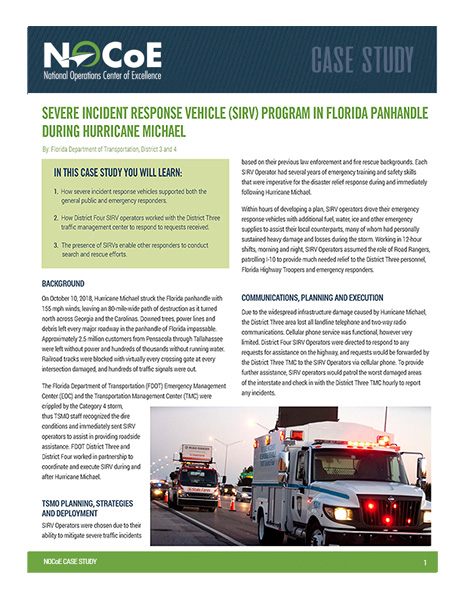 1. How severe incident response vehicles supported both the general public and emergency responders.

3. The presence of SIRVs enable other responders to conduct search and rescue efforts.

On October 10, 2018, Hurricane Michael struck the Florida panhandle with 155 mph winds, leaving an 80-mile-wide path of destruction as it turned north across Georgia and the Carolinas. Downed trees, power lines and debris left every major roadway in the panhandle of Florida impassable. Approximately 2.5 million customers from Pensacola through Tallahassee were left without power and hundreds of thousands without running water. Railroad tracks were blocked with virtually every crossing gate at every intersection damaged, and hundreds of traffic signals were out.

The Florida Department of Transportation (FDOT) Emergency Management Center (EOC) and the Transportation Management Center (TMC) were crippled by the Category 4 storm, thus TSMO staff recognized the dire conditions and immediately sent SIRV operators to assist in providing roadside assistance. FDOT District Three and District Four worked in partnership to coordinate and execute SIRV during and after Hurricane Michael.

SIRV Operators were chosen due to their ability to mitigate severe traffic incidents based on their previous law enforcement and fire rescue backgrounds. Each SIRV Operator had several years of emergency training and safety skills that were imperative for the disaster relief response during and immediately following Hurricane Michael.

Within hours of developing a plan, SIRV operators drove their emergency response vehicles with additional fuel, water, ice and other emergency supplies to assist their local counterparts, many of whom had personally sustained heavy damage and losses during the storm. Working in 12-hour shifts, morning and night, SIRV Operators assumed the role of Road Rangers, patrolling I-10 to provide much needed relief to the District Three personnel, Florida Highway Troopers and emergency responders.

Due to the widespread infrastructure damage caused by Hurricane Michael, the District Three area lost all landline telephone and two-way radio communications. Cellular phone service was functional, however very limited. District Four SIRV Operators were directed to respond to any requests for assistance on the highway, and requests would be forwarded by the District Three TMC to the SIRV Operators via cellular phone. To provide further assistance, SIRV operators would patrol the worst damaged areas of the interstate and check in with the District Three TMC hourly to report any incidents.

As a result of District Four’s SIRV presence on the interstate, the Florida Highway Patrol (FHP) could focus their efforts on assisting the local residents’ search and rescue efforts. Meanwhile, staff provided daily updates on the events and stayed in contact with both District Three and SIRV operators so that they could properly assess the fluctuating situation and alter efforts as needed.

Due to the rapid manner in which FDOT District Three and Four were able to collaborate and formulate a response plan, the emergency road service patrol resumed within 24 hours of I-10 being cleared of debris. District Four SIRV began patrolling I-10 on Saturday, October 13, 2018 and in just the first five days, assisted over 300 motorists who would have otherwise been left stranded indefinitely. Also, because of SIRV’s presence, remote areas away from the interstate also benefitted as FHP was able to provide assistance to the local agencies.

The rapid response, actions and cooperation of all involved greatly lessened the impact to the community and responders alike, and it is clear that the initiative made all necessary contact and arrangements smoother and effective during the aftermath of Hurricane Michael.

The above and beyond work ethic, quick thinking and effective emergency planning of FDOT staff and SIRV Operators provided a much needed learning experience for future FDOT Districts in Florida on how additional response should always be considered.