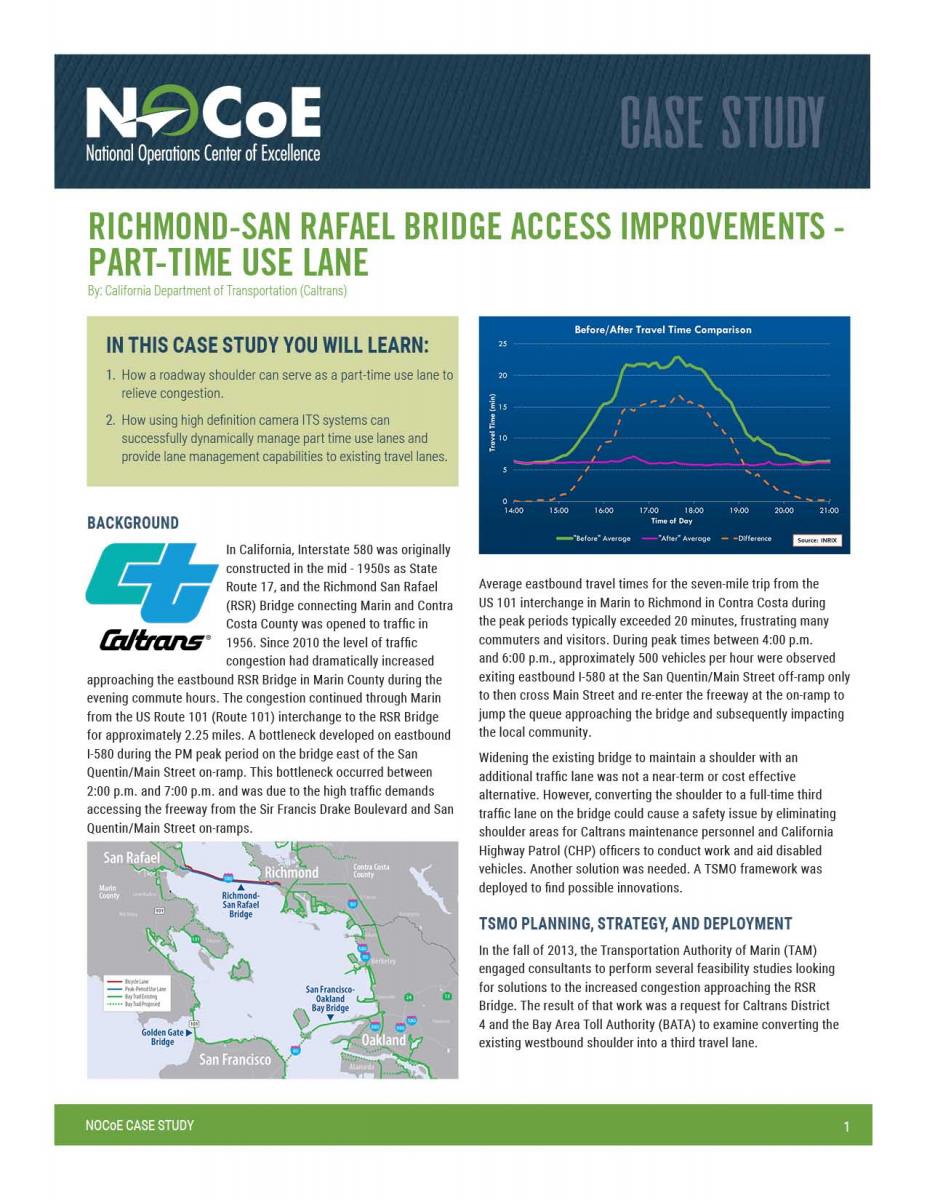 In California, Interstate 580 was originally constructed in the mid - 1950s as State Route 17 and the Richmond San Rafael (RSR) Bridge connecting Marin and Contra Costa County was opened to traffic in 1956. Since 2010 the level of traffic congestion had dramatically increased approaching the eastbound RSR Bridge in Marin County during the evening commute hours. The congestion continued through Marin from the US Route 101 (Route 101) interchange to the RSR Bridge for approximately 2.25 miles. A bottleneck developed on eastbound I-580 during the PM peak period on the Bridge east of the San Quentin/Main Street on- ramp. This bottleneck occurred between 2:00 PM and 7:00 PM and was due to the high traffic demands accessing the freeway from the Sir Francis Drake Boulevard and San Quentin/Main Street on-ramps.

Average eastbound travel times for the seven-mile trip from US 101 interchange in Marin to Richmond in Contra Costa during the peak periods typically exceeded 20 minutes, frustrating many commuters and visitors. During peak times between 4pm and 6pm, approximately 500 vehicles per hour were observed exiting eastbound I- 580 at the San Quentin/Main Street off-ramp only to then cross Main Street and re-enter the freeway at the on-ramp to jump the queue approaching the bridge and subsequently impacting the local community.

Widening the existing bridge to maintain a shoulder with an additional traffic lane was not a near-term or cost effective alternative. However, converting the shoulder to a full-time 3rd traffic lane on the bridge would could cause a safety issue by eliminate shoulder areas for Caltrans maintenance personnel and California Highway Patrol (CHP) officers to conduct work and aid disabled vehicles. Another solution was needed. TSMO framework was deployed to find possible innovations.

In fall of 2013, the Transportation Authority of Marin (TAM) engaged consultants to perform several feasibility studies looking for solutions to the increased congestion approaching the RSR Bridge. The result of that work was a request for Caltrans District 4 and the Bay Area Toll Authority (BATA) to examine converting the existing westbound shoulder into a third travel lane.

Due to the urgent need to find a solution for the severe traffic congestion and concerns from CHP and Caltrans Maintenance personnel on safety, Caltrans, FHWA and BATA decided to further investigate use of the part-time use lane as a strategy to address stakeholders concerns. After further coordination and outreach, BATA, the entity responsible for toll revenue collection and reinvestment of that revenue into the seven Caltrans owned toll bridges in the region (including the RSR Bridge), became the project sponsor and took to the lead in the implementation of the project. BATA contracted with HNTB, Parsons, and WSP to perform design, systems integration, and construction management for the project. As the eventual owner and operator of the improved bridge corridor, Caltrans was responsible for oversight and systems engineering support in close coordination with BATA.

Through the implementation of active traffic management using intelligent transportation systems (ITS), Caltrans and BATA converted the eastbound right shoulder to a dynamically managed third lane on the 4.0-mile-long I-580 Richmond San Rafael Bridge and added lane management capabilities to the two existing travel lanes. The $53M project also improved the westbound and eastbound approaches to the bridge and the Richmond Parkway/Point Richmond interchange. The third lane on the bridge’s lower deck is typically open daily from 2:00PM to 7:00PM and at other periods depending on traffic conditions and maintenance activities. All lanes on the RSR Bridge are controlled by lane use signs over each lane at twenty locations, all of which are interconnected by a redundant fiber optic network. High definition cameras throughout the corridor to allow operators to verify condition of the part- time use lane. Caltrans is the sole operator of the part- time use lane system.

Once the initial concept of the part- time use lane gained support among motorists and stakeholders, the project team followed the systems engineering process to develop system requirements that eventually led to successful integration of the new ITS elements into existing Caltrans ITS infrastructure. Utilizing the existing system architecture hardware installed at the regional transportation management center (TMC) reduced risks and costs and streamlined the integration process to allow the part time use lane (3rd lane) to open to the public after 16 months of construction. Caltrans TMC operators manage the part- time use lane using the same advanced traffic management software (ATMS) system used throughout the San Francisco Bay Area.

Unlike a typical roadway “add a lane” construction project, the part-time use lane system is operated daily and involves ongoing operations and maintenance. The project team coordinated with Caltrans Maintenance, Construction, and Traffic Operations teams along with the CHP to develop strategies and procedures to mitigate the risks and impacts of a part time use lane. Worker and public safety are a top priority, and constant communication among the response teams is a key component for TSMO success. The bridge’s existing shoulder is used by CHP and Caltrans tow service to aid disabled vehicles without interrupting traffic flow. With the elimination of the shoulder during peak periods, Caltrans and CHP needed to adjust their procedures and treat the shoulder as live traffic lane while increasing their communication with the District 4 TMC operators.

Consistent coordination meetings with managers and field staff produced updated standard operating procedures, and the project team implemented flexible operating rules that allowed the system to alert motorists if the shoulder or part time use lanes is blocked ahead. The outcome of the stakeholder outreach meetings helped the Caltrans staff from different functional areas better understand the daily operations of the toll bridge staff and risks workers face while serving the driving public. As a secondary benefit of the project and project development process, Caltrans, as the owner and operator of the RSR Bridge, has a better understanding of the challenges and operating procedures of this bridge. The project team also provided additional outreach, equipment and training to first responders to incorporate design features as the project necessitated changes emergency to incident response strategies on the RSR Bridge.

An extensive public information campaign led by BATA educated the public of ongoing construction and eventual operations of the part time use lane. The project garnered widespread television coverage helping the agencies to reinforce the importance of following indication on the lane use signs and messages on the changeable message signs.

Since opening to the public on April 20, 2018, the part-time use lane has eliminated afternoon congestion on eastbound I- 580 onto the bridge saving drivers approximately 15 minutes daily on their seven mile trip from Marin to Contra Costa County. This equates to annual savings of 700,000 vehicle- hours of delay on weekdays and another 91,000 vehicle hours on weekends. Queue jumping and local streets congestion near the RSR Bridge in Marin County has decreased. The expanded capacity of the bridge during the PM peak period did generate some moderate downstream impacts, most of which were addressed by minor intersection and ramp improvements constructed by the project. Caltrans, City of Richmond, and BATA continued to closely coordinate traffic management activities even after the part-time use lane opened including developing optimized signal timing plans to mitigate the impacts. The three agencies proactively monitor RSR bridge corridors and major arterials and jointly implement improvements in consultation with the community including large employers such as Chevron.

The lane use signs across all three lanes provide the added benefit of helping Caltrans manage incidents and lane closures on the bridge in real-time and minimize exposure for responders clearing crashes and disabled vehicles and roadway maintenance personnel. The project has increased the daily communications between traffic operations, maintenance and construction personnel operating and maintaining the RSR Bridge.

As the first part-time use lane on a freeway in California, the project demonstrated existing shoulders, while helpful to maintenance and enforcement personnel could be used as part- time use lanes to ease congestion. The success of this project has helped similar projects in the San Francisco Bay Area region looking to use existing paved shoulders to relieve congestion or provide priority for transit gain support from a variety of stakeholder groups. From a technology standpoint, the project further demonstrated the flexibility that full color changeable message signs provide for traffic management and replication of regulatory static traffic signs.