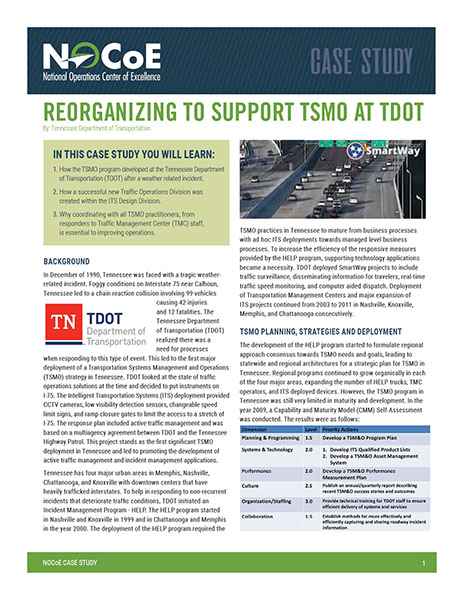 In December of 1990, Tennessee was faced with a tragic weather-related incident. Foggy conditions on Interstate 75 near Calhoun, Tennessee led to a chain reaction collision involving 99 vehicles causing 42 injuries and 12 fatalities. The Tennessee Department of Transportation (TDOT) realized there was a need for processes when responding to this type of event. This led to the first major deployment of a Transportation Systems Management and Operations (TSMO) strategy in Tennessee. TDOT looked at the state of traffic operations solutions at the time and decided to put instruments on I-75. The Intelligent Transportation Systems (ITS) deployment provided CCTV cameras, low visibility detection sensors, changeable speed limit signs, and ramp closure gates to limit the access to a stretch of I-75. The response plan included active traffic management and was based on a multiagency agreement between TDOT and the Tennessee Highway Patrol. This project stands as the first significant TSMO deployment in Tennessee and led to promoting the development of active traffic management and incident management applications.

Tennessee has four major urban areas in Memphis, Nashville, Chattanooga, and Knoxville with downtown centers that have heavily trafficked interstates. To help in responding to non-recurrent incidents that deteriorate traffic conditions, TDOT initiated an Incident Management Program - HELP. The HELP program started in Nashville and Knoxville in 1999 and in Chattanooga and Memphis in the year 2000. The deployment of the HELP program required the TSMO practices in Tennessee to mature from business processes with ad hoc ITS deployments towards managed level business processes. To increase the efficiency of the responsive measures provided by the HELP program, supporting technology applications became a necessity. TDOT deployed SmartWay projects to include traffic surveillance, disseminating information for travelers, real-time traffic speed monitoring, and computer aided dispatch. Deployment of Transportation Management Centers and major expansion of ITS projects continued from 2003 to 2011 in Nashville, Knoxville, Memphis, and Chattanooga consecutively.

The development of the HELP program started to formulate regional approach consensus towards TSMO needs and goals, leading to statewide and regional architectures for a strategic plan for TSMO in Tennessee. Regional programs continued to grow organically in each of the four major areas, expanding the number of HELP trucks, TMC operators, and ITS deployed devices. However, the TSMO program in Tennessee was still very limited in maturity and development. In the year 2009, a Capability and Maturity Model (CMM) Self-Assessment was conducted. The results were as follows:

Building on the progress in advancing TSMO in the areas of freeway management and Traffic Incident Management (TIM) between 1990 and 2009, the concept of TSMO as an agency practice and core value started to take hold with the Capability Maturity Model (CMM) Self-Assessment conducted in November 2009. The CMM was an agency-wide effort. Robust outreach methods and communication best practices were used to reach key work units within TDOT as well as spread awareness among all TDOT staff about the importance of Operations in managing existing and future infrastructure investments. The importance of breaking down silos was emphasized. The 2009 CMM also furthered the effort to collaborate and communicate with first responder partners, foremost of which is the Tennessee Highway Patrol (THP). Improved communication within the agency, with other agencies, and with the public is a key element of each of the observations from the 2009 CMM Self-Assessment referenced above. Many of the action items from the CMM involved communication and outreach to other TDOT Divisions such as Information Technology, Local Programs, and Long-Range Planning. Renewed focus on outreach and collaboration with local agency partners such as MPO and traffic signal maintaining agencies, as well as federal agency partners such as FHWA, was also important. As the action items from the CMM began to be addressed, the culture of willing introspection and seeking improvement resulted in the top-to-bottom review (TTBR) conducted in 2012. Like the 2009 CMM, the TTBR was an agency wide effort that involved robust communication to all TDOT staff, outreach to the first responder community, local agency partners, and the public. The need to reorganize to more effectively support TSMO was emphasized as a priority during the 2012 TTBR. Creation of the Traffic Operations Division was a direct result of the 2009 CMM Self-Assessment and the 2012 TTBR.

Creation of the Traffic Operations Division in 2013 demonstrates the commitment of TDOT Leadership to making significant organizational changes to support the many benefits that effective use of TSMO can bring to an organization. Positive benefits have come from many areas and have steadily increased since the Traffic Operations Division was established. Some examples are:

One of the lessons learned is that mainstreaming TSMO is an ongoing process and TSMO is not a panacea for all challenges of roadway system management. It takes consistent effort and renewed focus on a continual basis.

For additional information from a previous presentation on the TDOT TMSO Development Process Presentation: https://dot.ca.gov/-/media/dot-media/programs/traffic-operations/documents/tsmo-presentation-freeze-planning-a11y.pdf