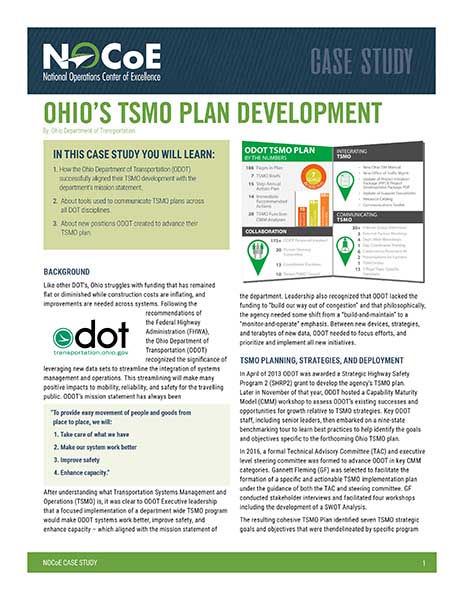 Like other DOT’s, Ohio struggles with funding that has remained flat or diminished while construction costs are inflating, and improvements are needed across systems. Following the recommendations of Federal Highway Administration (FHWA), The Ohio Department of Transportation (ODOT) recognized the significance of leveraging new data sets to streamline the integration of systems management and operations. This streamlining will make many positive impacts to mobility, reliability, and safety for the travelling public. ODOT’s Mission statement has always been “To provide easy movement of people and goods from place to place, we will: 1. Take care of what we have; 2. Make our system work better; Improve safety; 4. Enhance capacity.” After understanding what Transportation Systems Management and Operations (TSMO) is, it was clear to ODOT Executive leadership that a focused implementation of a department wide TSMO program would make ODOT systems work better, improve safety, and enhance capacity – which aligned with the mission statement of the Department. Leadership also recognized that ODOT lacked the funding to “build our way out of congestion” and that philosophically, the agency needed some shift from a “build-and-maintain” to a “monitor-and-operate” emphasis. Between new devices, strategies, and terabytes of new data, ODOT needed to focus efforts and prioritize implement all new initiatives.

In April of 2013 ODOT was awarded a Strategic Highway Safety Program (SHRP2) grant to develop the agency’s TSMO plan. Later in November of that year, ODOT hosted a Capability Maturity Model (CMM) Workshop to assess ODOT’s existing successes and opportunities for growth relative to TSMO strategies. Key ODOT staff, including senior leaders, then embarked on a nine-state benchmarking tour to learn best practices to help identify the goals and objectives specific to the forthcoming Ohio TSMO plan.

In 2016, a formal Technical Advisory Committee (TAC) and Executive level steering committee was formed to advance ODOT in key CMM categories. Gannett Fleming (GF) was selected to facilitate the formation of a specific and actionable TSMO implementation plan under the guidance of both the TAC and steering committee. GF conducted stakeholder interviews and facilitated four workshops including the development of a SWOT Analysis.

The resulting cohesive TSMO Plan identified seven TSMO Strategic Goals and Objectives that were then delineated by specific Program level objectives that would enhance the maturity of the strategic objectives. Thirty-four (34) policy actions including the creation of ten core performance measures, were then recommended to advance the program objectives. Subsequently, an “Early Action Implementation Plan” was generated along with subsequent annual action plans to continue CMM growth.

Since TSMO integrates across nearly every discipline of a typical DOT, the project team intentionally set out to communicate the plan to all internal staff and external stakeholders. Dozens of presentations were given where the language was modified based on the audience and their expertise. A short video was created to explain ODOT’s new TSMO strategy. Continuity with the existing mission and core values of ODOT was emphasized to gain acceptance. The new plan was highlighted in ODOT’s internal newsletter and weekly news video. A series of one-pagers were created identifying how TSMO interrelates to various Divisions of ODOT, similar to the nine fact sheets later developed by FHWA, to explain how TSMO relates to the various core transportation programs.

The greatest benefit in implementing this plan was having early executive buy-in to deploy these strategies. Leveraging TSMO as an excellent fit with the core mission of ODOT along with the funding and congestion constraints made it an easier sell. Utilizing data to identify mobility and reliability challenges in specific locations and the ability to prioritize countermeasures with a quicker turnaround than traditional design build projects made the case for adoption strong. Since adopting the plan and completing 71% of our action plan items, ODOT has successfully shifted towards a philosophy of managing traffic to ease congestion. Instead of addressing Operational issues “ad-hoc,” the Department now focuses on Planning for Operations. ODOT now has realigned the Division of Operations to include a new Office of Traffic Management, that includes the statewide Traffic Management Center (TCM) and subsequent Operations Programs, a Performance Measures section, and a Planning for Operations section that focuses on the Capital improvements. The Planning for Operations section is tasked with creating and managing the process for making data driven investments for TSMO projects. Most notably, ODOT now has a dedicated TSMO line item in the annual budget for TSMO- specific projects, in addition to operations program budgets for the TMC and existing ITS budgets. In the TMC, a new “TMC Specialist” job classification was created to manage new corridors. An ITS Specialist job class has been created to address new ITS technologies. A TSMO Coordinator role and position description was created in each District to coordinate and integrate the TSMO activities within each District. Furthermore, ODOT has aligned the Transportation Asset Management and TSMO Programs as a core ODOT strategic direction.