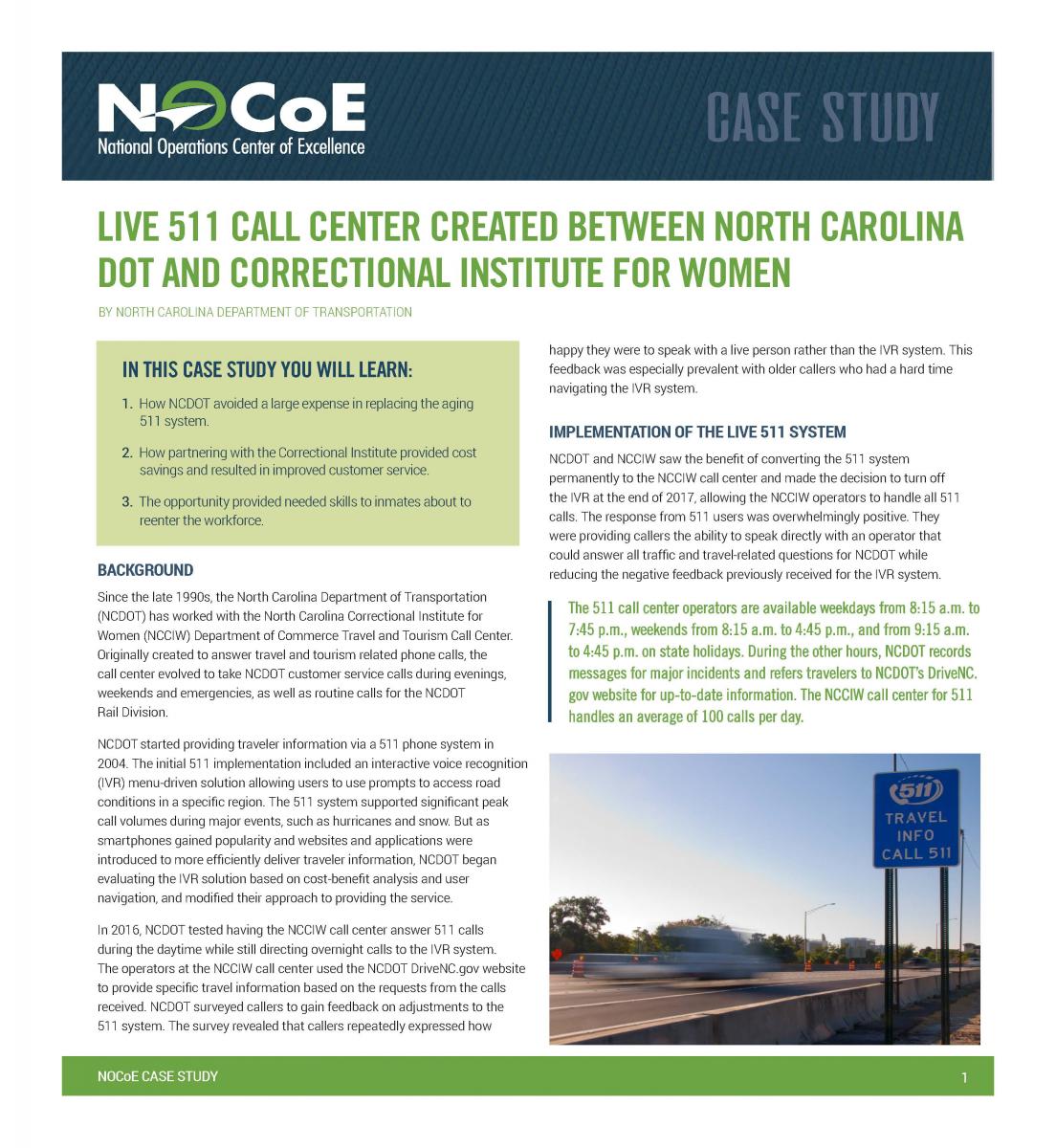 1. How NCDOT avoided a large expense in replacing the aging 511 system.

2. How partnering with the Correctional Institute provided cost savings and resulted in improved customer service.

3. The opportunity provided needed skills to inmates about to reenter the workforce.

Since the late 1990s, the North Carolina Department of Transportation (NCDOT) has worked with the North Carolina Correctional Institute for Women (NCCIW) Department of Commerce Travel and Tourism Call Center. Originally created to answer travel and tourism related phone calls, the call center evolved to take NCDOT customer service calls during evenings, weekends and emergencies, as well as routine calls for the NCDOT Rail Division.

NCDOT started providing traveler information via a 511 phone system in 2004. The initial 511 implementation included an interactive voice recognition (IVR) menu-driven solution allowing users to use prompts to access road conditions in a specific region. The 511 system supported significant peak call volumes during major events, such as hurricanes and snow. But as smartphones gained popularity and websites and applications were introduced to more efficiently deliver traveler information, NCDOT began evaluating the IVR solution based on cost-benefit analysis and user navigation, and modified their approach to providing the service.

In 2016, NCDOT tested having the NCCIW call center answer 511 calls during the daytime while still directing overnight calls to the IVR system. The operators at the NCCIW call center used the NCDOT DriveNC.gov website to provide specific travel information based on the requests from the calls received. NCDOT surveyed callers to gain feedback on adjustments to the 511 system. The survey revealed that callers repeatedly expressed how happy they were to speak with a live person rather than the IVR system. This feedback was especially prevalent with older callers who had a hard time navigating the IVR system.

IMPLEMENTATION OF THE LIVE 511 SYSTEM

NCDOT and NCCIW saw the benefit of converting the 511 system permanently to the NCCIW call center and made the decision to turn off the IVR at the end of 2017, allowing the NCCIW operators to handle all 511 calls. The response from 511 users was overwhelmingly positive. They were providing callers the ability to speak directly with an operator that could answer all traffic and travel-related questions for NCDOT while reducing the negative feedback previously received for the IVR system.

During emergencies and major incidents, such as Hurricane Florence in 2018, the NCCIW call center expands to offer 24/7 live operator coverage via the 511 call center. NCDOT also provides volunteers as needed to supplement the 511 call center operators from NCCIW. During special events, incoming calls spike as conditions are constantly changing and users are seeking real-time road condition data.

During Hurricane Florence in 2018, just under 4,000 calls were received in just one day. The increase in call volumes are typical for major incidents and events. In the case of Hurricane Florence, increased call volumes to the 511 system were supported by the NCCIW call center, volunteers and NCDOT staff. During the two-week period, close to 30,000 storm-related 511 calls were answered.

The 511 call center provides NCCIW inmates the opportunity to hone skills such as navigating websites, using call center technology and interacting with the public. In addition to gaining skills to support transitioning back into public life, women working in the 511 call center were excited to receive calls and communicate with individuals seeking traveler information. The 511 call center is also the only air-conditioned job offered to NCCIW inmates, making it a highly sought after position.

NCDOT was able to find an alternative to pursuing a large procurement to replace the aging 511 system, and partnering with NCCIW and the Department of Commerce provided significant cost savings.