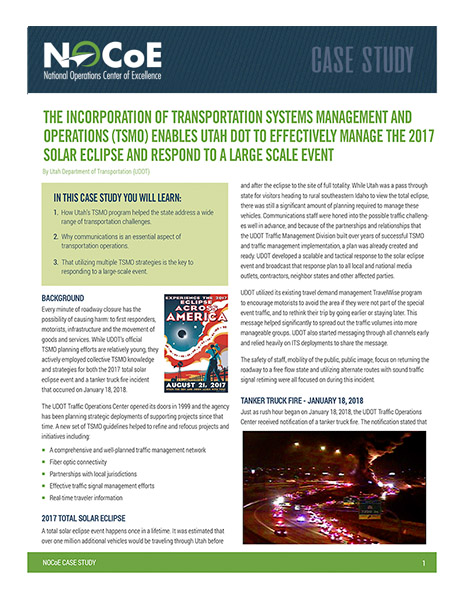 2. Why communications is an essential aspect of transportation operations.

3. That utilizing multiple TSMO strategies is the key to responding to a large-scale event.

Every minute of roadway closure has the possibility of causing harm: to first responders, motorists, infrastructure and the movement of goods and services. While UDOT’s official TSMO planning efforts are relatively young, they actively employed collective TSMO knowledge and strategies for both the 2017 total solar eclipse event and a tanker truck fire incident that occurred on January 18, 2018.

The UDOT Traffic Operations Center opened its doors in 1999 and the agency has been planning strategic deployments of supporting projects since that time. A new set of TSMO guidelines helped to refine and refocus projects and initiatives including:

A total solar eclipse event happens once in a lifetime. It was estimated that over one million additional vehicles would be traveling through Utah before and after the eclipse to the site of full totality. While Utah was a pass through state for visitors heading to rural southeastern Idaho to view the total eclipse, there was still a significant amount of planning required to manage these vehicles. Communications staff were honed into the possible traffic challeng­es well in advance, and because of the partnerships and relationships that the UDOT Traffic Management Division built over years of successful TSMO and traffic management implementation, a plan was already created and ready. UDOT developed a scalable and tactical response to the solar eclipse event and broadcast that response plan to all local and national media outlets, contractors, neighbor states and other affected parties.

UDOT utilized its existing travel demand management TravelWise program to encourage motorists to avoid the area if they were not part of the special event traffic, and to rethink their trip by going earlier or staying later. This message helped significantly to spread out the traffic volumes into more manageable groups. UDOT also started messaging through all channels early and relied heavily on ITS deployments to share the message.

The safety of staff, mobility of the public, public image, focus on returning the roadway to a free flow state and utilizing alternate routes with sound traffic signal retiming were all focused on during this incident.

The key to success within this incident was the reliance on TSMO strategies and UDOT’s Incident Management Team (IMT) relationships with local law enforcement, developed over the last 20 years.

The tanker fire incident utilized all of UDOT’s resources and planning efforts for managing a successful emergency event. Still, an after action review of the event identified potential improvements, including addressing alternate routing issues and potential data elements that could be captured to ensure better planning for a future event.

CONCLUDE WITH A CHALLENGE