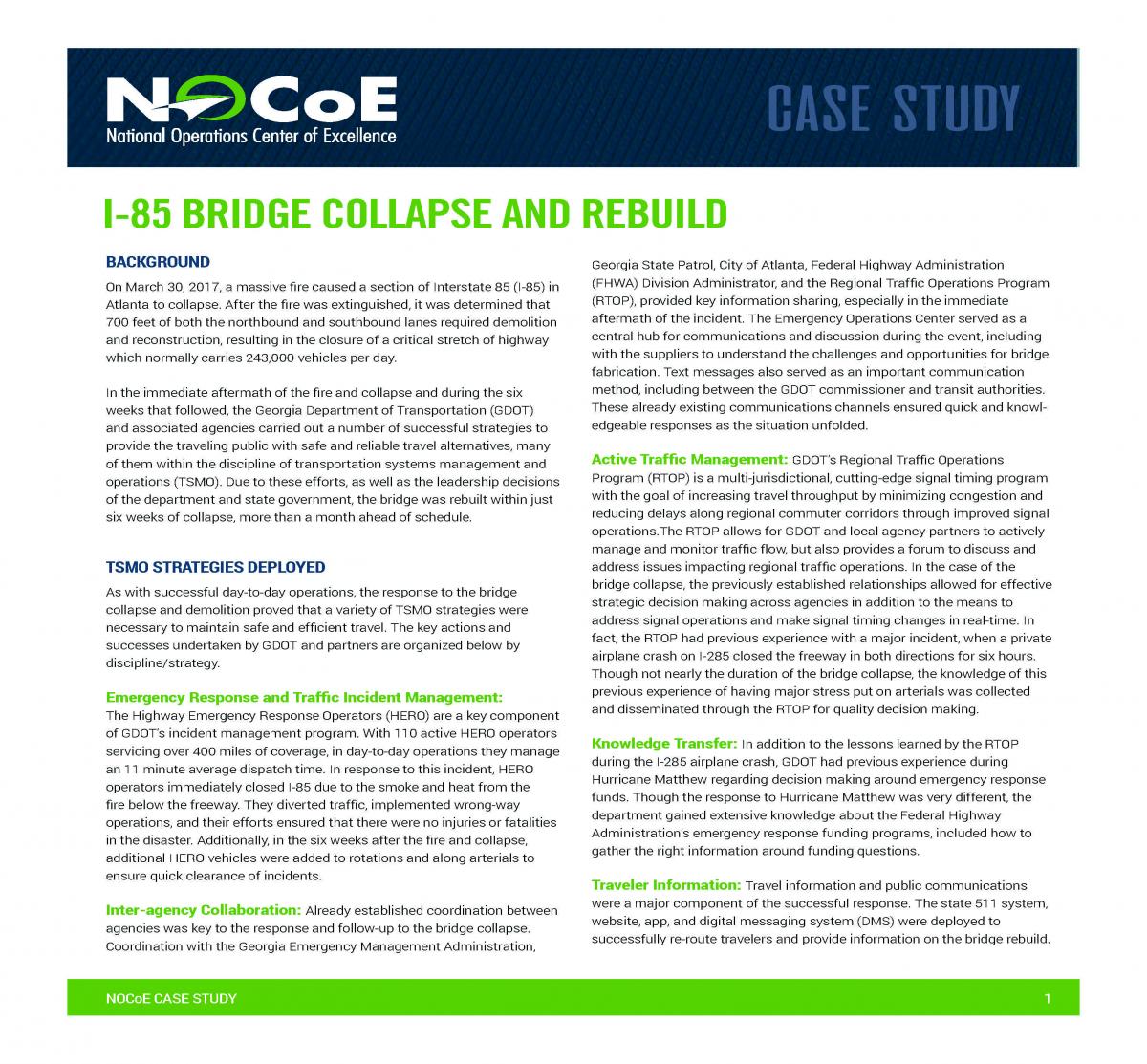 On March 30, 2017, a massive fire caused a section of Interstate 85 (I-85) in Atlanta to collapse. After the fire was extinguished, it was determined that 700 feet of both the northbound and southbound lanes required demolition and reconstruction, resulting in the closure of a critical stretch of highway which normally carries 243,000 vehicles per day.

In the immediate aftermath of the fire and collapse and during the six weeks that followed, the Georgia Department of Transportation (GDOT) and associated agencies carried out a number of successful strategies to provide the traveling public with safe and reliable travel alternatives, many of them within the discipline of transportation systems management and operations (TSMO). Due to these efforts, as well as the leadership decisions of the department and state government, the bridge was rebuilt within just six weeks of collapse, more than a month ahead of schedule.

As with successful day-to-day operations, the response to the bridge collapse and demolition proved that a variety of TSMO strategies were necessary to maintain safe and efficient travel. The key actions and successes undertaken by GDOT and partners are organized below by discipline/strategy.

Emergency Response and Traffic Incident Management: The Highway Emergency Response Operators (HERO) are a key component of GDOT’s incident management program. With 110 active HERO operators servicing over 400 miles of coverage, in day-to-day operations they manage an 11 minute average dispatch time. In response to this incident, HERO operators immediately closed I-85 due to the smoke and heat from the fire below the freeway. They diverted traffic, implemented wrong-way operations, and their efforts ensured that there were no injuries or fatalities in the disaster. Additionally, in the six weeks after the fire and collapse, additional HERO vehicles were added to rotations and along arterials to ensure quick clearance of incidents.

Inter-agency Collaboration: Already established coordination between agencies was key to the response and follow-up to the bridge collapse. Coordination with the Georgia Emergency Management Administration, Georgia State Patrol, City of Atlanta, Federal Highway Administration (FHWA) Division Administrator, and the Regional Traffic Operations Program (RTOP), provided key information sharing, especially in the immediate aftermath of the incident. The Emergency Operations Center served as a central hub for communications and discussion during the event, including with the suppliers to understand the challenges and opportunities for bridge fabrication. Text messages also served as an important communication method, including between the GDOT commissioner and transit authorities. These already existing communications channels ensured quick and knowl­edgeable responses as the situation unfolded.

Active Traffic Management: GDOT’s Regional Traffic Operations Program (RTOP) is a multi-jurisdictional, cutting-edge signal timing program with the goal of increasing travel throughput by minimizing congestion and reducing delays along regional commuter corridors through improved signal operations.The RTOP allows for GDOT and local agency partners to actively manage and monitor traffic flow, but also provides a forum to discuss and address issues impacting regional traffic operations. In the case of the bridge collapse, the previously established relationships allowed for effective strategic decision making across agencies in addition to the means to address signal operations and make signal timing changes in real-time. In fact, the RTOP had previous experience with a major incident, when a private airplane crash on I-285 closed the freeway in both directions for six hours. Though not nearly the duration of the bridge collapse, the knowledge of this previous experience of having major stress put on arterials was collected and disseminated through the RTOP for quality decision making.

Knowledge Transfer: In addition to the lessons learned by the RTOP during the I-285 airplane crash, GDOT had previous experience during Hurricane Matthew regarding decision making around emergency response funds. Though the response to Hurricane Matthew was very different, the department gained extensive knowledge about the Federal Highway Administration’s emergency response funding programs, included how to gather the right information around funding questions.

Traveler Information: Travel information and public communications were a major component of the successful response. The state 511 system, website, app, and digital messaging system (DMS) were deployed to successfully re-route travelers and provide information on the bridge rebuild.

Telecommunications: During the fire and collapse, many traffic camera feeds died but were quickly restored due to the extent of the fiber network and switchgear redundancy.

With over 240,000 vehicles per day affected by the bridge collapse, the building of a new bridge was extremely important to the overall regional transportation system. In response to this need, the governor created a $3.1 million incentives program.

Initially, GDOT announced a reopening of the highway by June 15. However, with the encouragement of the governor, GDOT approached the contractor and offered a $1.5 million bonus for opening the road by May 25, a $2 million bonus for opening by May 21, and an additional $200,000 for each day it’s open before May 21, up to a max of $3.1 million. The incentive program allowed the contractor to deploy teams 24 hours a day resulting in a reopening of the roadway by May 12, more than a month ahead of schedule. This accelerated timeline was estimated to have saved Georgia travelers $27 million in lost time and productivity.