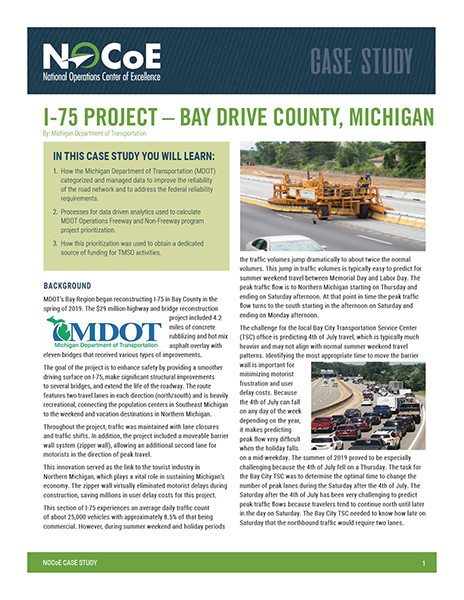 MDOT’s Bay Region began reconstructing I-75 in Bay County in the spring of 2019. The $29 million highway and bridge reconstruction project included 4.2 miles of concrete rubblizing and hot mix asphalt overlay with eleven bridges that received various types of improvements.

The goal of the project is to enhance safety by providing a smoother driving surface on I-75, make significant structural improvements to several bridges, and extend the life of the roadway. The route features two travel lanes in each direction (north/south) and is heavily recreational, connecting the population centers in Southeast Michigan to the weekend and vacation destinations in Northern Michigan.

Throughout the project, traffic was maintained with lane closures and traffic shifts. In addition, the project included a moveable barrier wall system (zipper wall), allowing an additional second lane for motorists in the direction of peak travel.

This innovation served as the link to the tourist industry in Northern Michigan, which plays a vital role in sustaining Michigan’s economy. The zipper wall virtually eliminated motorist delays during construction, saving millions in user delay costs for this project.

This section of I-75 experiences an average daily traffic count of about 25,000 vehicles with approximately 8.5% of that being commercial. However, during summer weekend and holiday periods the traffic volumes jump dramatically to about twice the normal volumes. This jump in traffic volumes is typically easy to predict for summer weekend travel between Memorial Day and Labor Day. The peak traffic flow is to Northern Michigan starting on Thursday and ending on Saturday afternoon. At that point in time the peak traffic flow turns to the south starting in the afternoon on Saturday and ending on Monday afternoon.

The challenge for the local Bay City Transportation Service Center (TSC) office is predicting 4th of July travel, which is typically much heavier and may not align with normal summer weekend travel patterns. Identifying the most appropriate time to move the barrier wall is important for minimizing motorist frustration and user delay costs. Because the 4th of July can fall on any day of the week depending on the year, it makes predicting peak flow very difficult when the holiday falls on a mid-weekday. The summer of 2019 proved to be especially challenging because the 4th of July fell on a Thursday. The task for the Bay City TSC was to determine the optimal time to change the number of peak lanes during the Saturday after the 4th of July. The Saturday after the 4th of July has been very challenging to predict peak traffic flows because travelers tend to continue north until later in the day on Saturday. The Bay City TSC needed to know how late on Saturday that the northbound traffic would require two lanes.

TDMS replaced a collection of legacy programs that were designed, built, and maintained in house. The legacy programs worked together to allow for the storing, viewing, and accessing of traffic count data. However, the programs require additional formatting and processing of data in order for the data to be fully analyzed.

The new cloud-based application replaced more than 10 legacy programs and offers significantly enhanced functionality and capabilities. Importantly, the transition to TDMS was intended to make traffic count data, which is collected and maintained by MDOT’s Bureau of Transportation Planning, more widely accessible for decision making purposes. It also extends the reach of our traffic count data to external organizations. TDMS, which is a commercially available traffic count program, continues to be integrated with other MDOT and state of Michigan programs and applications to improve data security, integrity, and quality.

During the transition to TDMS, historic traffic count data from the past 10 years was migrated into the new system for most short duration count locations. For locations with continuous count equipment, data from the past 20 years was migrated into TDMS where possible. This rich treasury of historic data combined with the enhanced capabilities of TDMS came in handy when the Bay City TSC needed to quickly analyze traffic patterns over the 4th of July Holiday weekend. The challenge was to determine the most appropriate time to shift a moveable traffic barrier to best accommodate holiday travelers.

In order to determine the best time to shift the moveable barrier, MDOT’s Bay City TSC worked with the Bureau of Transportation Planning to determine whether/how TDMS could be used to assist in this decision-making process. The team identified the previous years in which the 4th of July fell on a Thursday (2013, 2002, and 1996). The traffic patterns throughout the 4th of July weekend for all three of the prior years were nearly identical. Using the 2013 data and tools available through TDMS, the team could quickly pull and graph directional traffic counts for the Friday and Saturday following the 4th of July Holiday to study the flow of traffic.

Using the graph date pulled from the continuous count station the team was able to determine the optimal time to order the zipper wall to switch the additional lane to the southbound. The time window the contractor was given based on the study was between 10:00 p.m. Friday and 8:30 a.m. Saturday morning. This new window of time was several hours later then the normal window allowed during the typical Saturday.

The communications plan throughout the duration of this project and including the 4th of July holiday period was to use the many digital changeable message boards along the I-75 corridor. The Bay City TSC worked with Statewide Transportation Operations Center (STOC) to setup a pre-planned messaging for each stage of the project. Portable message boards were also used to provide additional information on the project. STOC continually monitored the work zones with cameras and speed detection devices. If any delays were detected, the message boards and MDOT’s socal media messaging would go into action alerting travelers to any delays ahead of them.

The after action review of the traffic delays proved that the TDMS provided the best posible outcome to reduce the delays related to this construction zone. While historical traffic count data would have been available through our legacy traffic count database programs, the time and level of effort needed to prepare the data for analysis has been greatly reduced with TDMS. This simple example of the innovative movable zipper wall along with the TDMS data clearly demonstrates how to get the “Best Use of Management of Data” across departments to improve the traveling experience to thousands of Michigan holiday weekend vacationers in the summer of 2019.

Downloads Back to Search Results