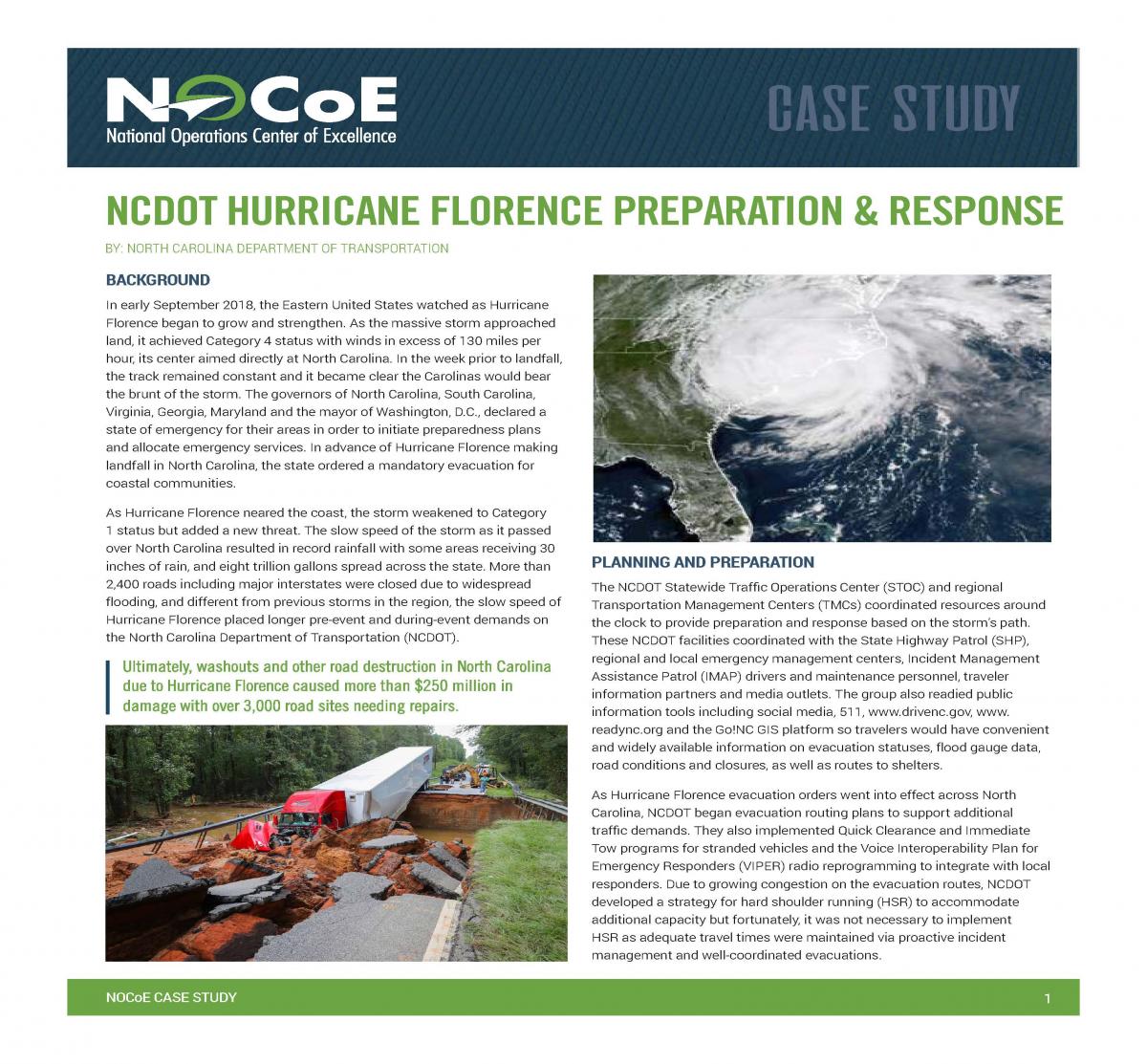 In early September 2018, the Eastern United States watched as Hurricane Florence began to grow and strengthen. As the massive storm approached land, it achieved Category 4 status with winds in excess of 130 miles per hour, its center aimed directly at North Carolina. In the week prior to landfall, the track remained constant and it became clear the Carolinas would bear the brunt of the storm. The governors of North Carolina, South Carolina, Virginia, Georgia, Maryland and the mayor of Washington, D.C., declared a state of emergency for their areas in order to initiate preparedness plans and allocate emergency services. In advance of Hurricane Florence making landfall in North Carolina, the state ordered a mandatory evacuation for coastal communities.
As Hurricane Florence neared the coast, the storm weakened to Category 1 status but added a new threat. The slow speed of the storm as it passed over North Carolina resulted in record rainfall with some areas receiving 30 inches of rain, and eight trillion gallons spread across the state. More than 2,400 roads including major interstates were closed due to widespread flooding, and different from previous storms in the region, the slow speed of Hurricane Florence placed longer pre-event and during-event demands on the North Carolina Department of Transportation (NCDOT). Ultimately, washouts and other road destruction in North Carolina due to Hurricane Florence caused more than $250 million in damage with over 3,000 road sites needing repairs.

The group implemented elongated merge areas at multiple key interchanges on main interstate evacuation routes to increase road capacity and decrease congestion during the evacuation. NCDOT also developed plans to provide an interstate detour that directed motorists to completely bypass North Carolina as well as regional and local evacuation routes to keep them away from flood prone areas of the state.

The emergency management routing was successful due to the focused effort to keep non-essential traffic off more susceptible and unpredictable routes. All NCDOT divisions were decisively engaged in actively clearing routes while providing proactive updates on route conditions. NCDOT also partnered with the North Carolina National Guard to provide supplemental information on route conditions, and to determine effective bypass routes and traffic impacts for wide swaths of area. IMAP drivers, SHP officers and the new drone program with the Division of Aviation were able to provide visual confirmation and situational awareness in areas with limited camera coverage. Over 200 employees entered road condition information into www. drivenc.gov. In addition, NCDOT staff were assigned to work with navigation providers such as Waze, Bing, TrafficCast and Google, to ensure road closure information was accurately reflected and that user reported flooding was put into the NCDOT system. At the peak of the storm, over 1,600 roads were closed.

Impassable roads, particularly on the coast cut off communities, towns and cities from the mainland. Interstates I-40 and I-95 were flooded and closed throughout eastern North Carolina. Emergency responders, SHP and IMAP drivers worked with hydraulics experts to predict flood stages and paths. Well after Hurricane Florence passed, flooding kept some roads closed for weeks. Flood status on certain roads would fluctuate from dry, flooded, receded, then back to flooded again due to the rainfall deluge. Until the water receded, there was a coordinated effort with GPS data providers to refine flooding data to reflect accurate road conditions. North Carolina was successful in maintaining a consistent message from the governor, emergency management, Highway Patrol and NCDOT, by telling the public to use DriveNC.gov for reliable travel condition data which resulted in over seven million page views during Hurricane Florence. Volunteers and call center operators answered more than 27,000 511 system calls, and providing real-time information to the public reduced confusion, congestion and frustration for evacuees while helping emergency responders actively engage in keeping evacuation routes safe.NCDOT subsequently worked for weeks and months following the storm to clear and repair roads, as some of them had collapsed due to the severity of flooding.

NCDOT conducted an After-Action Review following Hurricane Florence and was pleased with the improved coordination and overall management of the event, but there were still areas that could be made better. NCDOT staff determined the following improvements could be made: IMAP driver routes and coverage areas were larger than normal and typically farther from home base which needed to be accounted for in scheduling; additional emergency management radios were needed and radio channels could be used more efficiently; streaming video from IMAP trucks to the STOC would reduce manual transmission; make traffic count data available in real-time; create a position to manage and disperse VIPER equipment; develop an automated overlay of flood warning areas with TIMS and install flood gauges at critical points to identify flash floods and river floods.