In This Case Study You Will Learn: 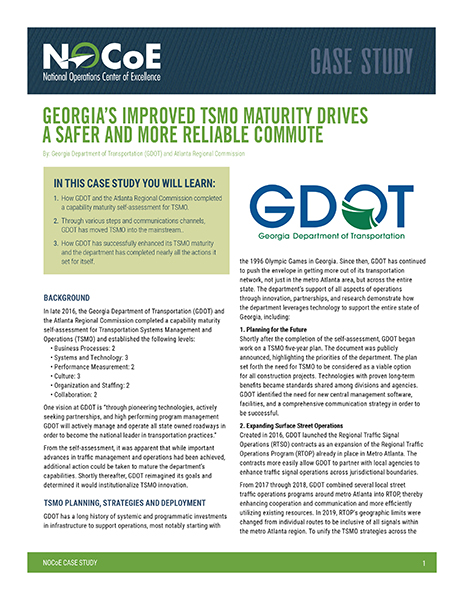 In late 2016, Georgia Department of Transportation (GDOT) and the Atlanta Regional Commission completed a capability maturity self-assessment for Transportation Systems Management and Operations (TSMO) and established the following levels:

One vision at GDOT is “through pioneering technologies, actively seeking partnerships, and high performing program management GDOT will actively manage and operate all state owned roadways in order to become the national leader in transportation practices.”

From the self-assessment, it was apparent that while important advances in traffic management and operations had been achieved, additional action could be taken to mature the Department’s capabilities. Shortly thereafter, GDOT reimagined its goals and determined it would institutionalize TSMO innovation.

GDOT has a long history of systemic and programmatic investments in infrastructure to support operations, most notably starting with the 1996 Olympic Games in Georgia. Since then, GDOT has continued to push the envelope in getting more out of its transportation network: not just in the metro Atlanta area, but across the entire state. The Department’s support of all aspects of operations through innovation, partnerships, and research demonstrate how the Department leverages technology to support the entire state of Georgia.

1. Planning for the Future

Shortly after the completion of the self-assessment, GDOT began work on a TSMO five-year plan. The document was publicly announced, highlighting the priorities of the Department. The plan set forth the need for TSMO to be considered as a viable option for all construction projects. Technologies with proven long-term benefits became standards shared among divisions and agencies. GDOT identified the need for new central management software, facilities, and a comprehensive communication strategy in order to be successful.

From 2017 through 2018, GDOT combined several local street traffic operations programs around Metro Atlanta into RTOP, thereby enhancing cooperation and communication and more efficiently utilizing existing resources. In 2019, RTOP’s geographic limits were changed from individual routes to be inclusive of all signals within the Metro Atlanta region. To unify the TSMO strategies across the state, a new Statewide Traffic Operations and Response Management (STORM) Concept of Operations was published.

In 2017, GDOT with private sector partners consolidated high-resolution data from over 6,500 signals and nearly 16,000 miles of vehicle probe data into corridor-wide performance measures for monthly and quarterly trends for each corridor. This effort automated a manual reporting system, saving hundreds of hours in development each month. The public-facing Measurement, Accuracy, and Reliability Kit (MARK 1) website, now the Automated Traffic Signals Performance Measures (ATSPM) website, allows engineers to track trends on an intersection, corridor, and programmatic level as well as visualize maintenance-related problems. The MARK 1 coding remains open source for other states to use and the ATSPM is also used by Utah and Virginia Departments of Transportation. Working with private sector partners, GDOT developed its Connected Data Platform (CDP) to begin tying disparate data sources together. In its current version, the CDP overlays crash, WAZE, ITS device, and highway patrol data in an easy to understand and user-friendly manner. The software is envisioned to bring in even more data sources, such as traffic signal analytics, road weather, and interstate operations data.

GDOT’s Strategic Communications Team and external consultant resources teams overhauled the messaging strategy used for TSMO projects. Before/After analyses were converted from long, technical documents to infographics and brochures that could be shared with elected officials, local agencies, and the general public. Four to five metrics are selected, such as reductions in congestion cost, improvements to travel time, and decreases in pedestrian wait time, and tailored to each stakeholder’s priorities to enhance the impact.

Before each holiday, GDOT completes an in-depth review of each major corridor to identify areas for improvement. The documents that are produced are dense engineering documents not suitable for public consumption. By taking key information from these reports, GDOT was able to generate a visual representation of forecasted traffic conditions, which was modeled after Baltimore’s methodology. GDOT’s simplified color-coding and graphics messaging were released on social media and traditional media outlets.

GDOT is partnering with the GMTA and DriveWyze to provide virtual signage and warning notifications that will utilize the mandated ELD system for the in-cab notification and a digital geofencing for the centralized system. Using the Advanced Traffic Management System (ATMS) computer programming platform from Kaspch, GDOT is building new data aggregation and alert system as well as virtual messaging that will be readable by connected vehicles and cellular devices. Finally, by employing a statewide deployment of INRIX’s HELP software, GDOT can send priority text notifications targeting specific drivers approaching dangerous queues or other roadway hazards.

Through the efforts previously described, GDOT has moved TSMO into the mainstream. This is evidenced by funding for the following TSMO projects:

• Largest deployment of connected vehicle technology in the United States. The project, currently 25% complete, will deploy over 1,700 roadside units and 1,000 on-board units at signalized intersections in Metro Atlanta.

• Deployment of automated incident detection along 16 centerline miles of interstate. This software has shown the ability to reduce average response time by 6 minutes, which in turn reduces incident congestion time by 30 minutes and the chances of a secondary incident by 14%.

Where expanded STORM surface street strategies and technologies have been implemented, GDOT has seen significant operational improvements. Over the last 2 years, Metro Atlanta’s regionally significant surface streets have experienced an average annual VMT growth rate of 1.8% from 2017 to 2019 while total delay decreased on average by 15.9% each year.

Aggregated traffic signal and corridor performance metrics identify in real-time the location and cause of bottlenecks and other operational deficiencies. Once identified, engineers can correct them through remote troubleshooting and timing adjustments. Through monthly performance analyses, reoccurring problems are escalated for quick response or full-scale project development to improve the roadway or ITS infrastructure. The data analytics tools that were enhanced or developed by GDOT have been made freely available to all public and private sector engineers in the state.

Undoubtedly, GDOT has successfully enhanced its TSMO maturity. The Department has completed nearly all the actions it set for itself and believes that the following levels have been achieved: