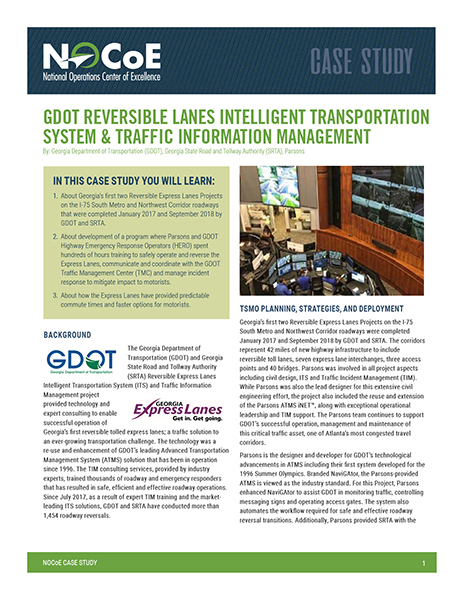 The Georgia Department of Transportation (GDOT) and Georgia State Road and Tollway Authority (SRTA) Reversible Express Lanes Intelligent Transportation System (ITS) and Traffic Information Management project provided technology and expert consulting to enable successful operation of Georgia’s first reversible tolled express lanes; a traffic solution to an ever-growing transportation challenge. The technology was a re-use and enhancement of GDOT’s leading Advanced Transportation Management System (ATMS) solution that has been in operation since 1996. The TIM consulting services, provided by industry experts, trained thousands of roadway and emergency responders that has resulted in safe, efficient and effective roadway operations. Since July 2017, as a result of expert TIM training and the market-leading ITS solutions, GDOT and SRTA have conducted more than 1,454 roadway reversals.

Georgia’s first two Reversible Express Lanes Projects on the I-75 South Metro and Northwest Corridor roadways were completed January 2017 and September 2018 by GDOT and SRTA. The corridors represent 42 miles of new highway infrastructure to include reversible toll lanes, seven express lane interchanges, three access points and 40 bridges. Parsons was involved in all project aspects including civil design, ITS and Traffic Incident Management (TIM). While Parsons was also the lead designer for this extensive civil engineering effort, the project also included the reuse and extension of the Parsons ATMS iNET™, along with exceptional operational leadership and TIM support. The Parsons team continues to support GDOT’s successful operation, management and maintenance of this critical traffic asset, one of Atlanta’s most congested travel corridors.

Parsons is the designer and developer for GDOT’s technological advancements in ATMS including their first system developed for the 1996 Summer Olympics. Branded NaviGAtor, the Parsons-provided ATMS is viewed as the industry standard. For this Project, Parsons enhanced NaviGAtor to assist GDOT in monitoring traffic, controlling messaging signs and operating access gates. The system also automates the workflow required for safe and effective roadway reversal transitions. Additionally, Parsons provided SRTA with the design, implementation and installation of the ITS network along with Parsons’ iNET™ software to enable dynamic toll pricing. SRTA’s solution was lower cost and lower risk because of the re-use of the NaviGAtor software.

Parsons and GDOT Highway Emergency Response Operators (HERO) spent hundreds of hours training to safely operate and reverse the Express Lanes, communicate and coordinate with GDOT Traffic Management Center (TMC) and manage incident response to mitigate impact to motorists. Parsons and GDOT conducted extensive training for nearly 2,000 emergency responders to better prepare them to effectively respond to incidents occurring in the express lanes. This training, using classroom table-top scenarios and in-field exercises, emphasized the importance of responders working as a unified team to clear the lanes and restore traffic flow for roadway hazards, inclement weather events and all major or minor incidents.

Parsons created the following documents for all responders in preparation for the NWC system opening:

As transportation has evolved over the years, so have the requirements for ITS and TIM solutions to provide for predictable and improved commute times, increased safety, reduced emissions and accurate real-time traffic information. GDOT and Parsons have partnered for 25 years to provide ATMS solutions that leverage existing infrastructure and drive innovation. As reported by the Commissioner of GDOT, the effectiveness of the project was evident in the first week of operation: