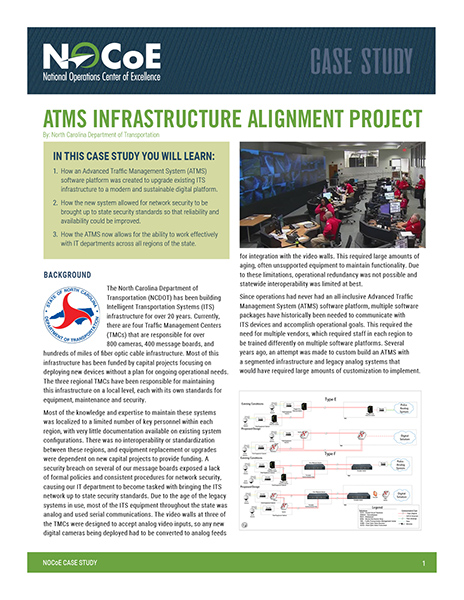 The North Carolina Department of Transportation (NCDOT) has been building Intelligent Transportation Systems (ITS) infrastructure for over 20 years. Currently, there are four Traffic Management Centers (TMCs) that are responsible for over 800 cameras, 400 message boards, and hundreds of miles of fiber optic cable infrastructure. Most of this infrastructure has been funded by capital projects focusing on deploying new devices without a plan for ongoing operational needs. The three regional TMCs have been responsible for maintaining this infrastructure on a local level, each with its own standards for equipment, maintenance and security.

Most of the knowledge and expertise to maintain these systems was localized to a limited number of key personnel within each region, with very little documentation available on existing system configurations. There was no interoperability or standardization between these regions, and equipment replacement or upgrades were dependent on new capital projects to provide funding. A security breach on several of our message boards exposed a lack of formal policies and consistent procedures for network security, causing our IT department to become tasked with bringing the ITS network up to state security standards. Due to the age of the legacy systems in use, most of the ITS equipment throughout the state was analog and used serial communications. The video walls at three of the TMCs were designed to accept analog video inputs, so any new digital cameras being deployed had to be converted to analog feeds for integration with the video walls. This required large amounts of aging, often unsupported equipment to maintain functionality. Due to these limitations, operational redundancy was not possible and statewide interoperability was limited at best.

Since operations had never had an all-inclusive Advanced Traffic Management System (ATMS) software platform, multiple software packages have historically been needed to communicate with ITS devices and accomplish operational goals. This required the need for multiple vendors, which required staff in each region to be trained differently on multiple software platforms. Several years ago, an attempt was made to custom build an ATMS with a segmented infrastructure and legacy analog systems that would have required large amounts of customization to implement. There was an identified need to standardize the architecture and build a scalable, supportable network to facilitate the procurement of an ATMS platform without heavy customization. With these limitations in mind, the ATMS Infrastructure Project was created to upgrade existing ITS infrastructure to a modern and sustainable digital platform with an end goal of providing a solid foundation for an ATMS software platform.

The main goal of the ATMS Infrastructure Project was to design a new statewide ITS network infrastructure from the ground up that is standardized, scalable and supportable. This new network would be required to comply with all existing state security standards and provide increased network reliability and availability. This effort would include integrating existing field infrastructure and upgrading analog systems to digital where feasible, including converting all three video walls in the TMCs to digital platforms. Since the IT department would be responsible for building and maintaining this new network, the first step in the planning process was to clearly define our goals and requirements for the project. Once our business unit’s goals were defined, the next critical step was to present needs to the IT department and align all goals with their capabilities and expectations. This project would be completely funded by IT, so it was critical to have a clear understanding of the resources and efforts that would be required to deliver the desired outcomes. This was not an easy task, since historically the ITS business unit has deployed equipment that either did not meet security requirements or was not able to be maintained by the IT department for various reasons.

Due to the fragmented nature of networks in the past, coordination with IT was either very limited or non-existent. In the early stages of this project, the IT department recognized a need to have full time resources dedicated to the support of the ITS infrastructure. A new team was created with the sole responsibility of ITS support, which had never existed within our organization before. The implementation strategy would be to upgrade the core network equipment and servers at the three TMCs first. Once the network backbone was in place, all existing field equipment would be migrated to the new network and analog systems would be converted to digital where feasible. After all remaining analog video was converted to digital, all three video walls would be upgraded to be able to accept digital video. The final phase would be to convert any video sharing with partner agencies from analog to digital. Due to the complexity of timing of this conversion, the original equipment would be left in place and the new network would be stood up in parallel to allow time for all partner agencies to migrate to the new systems.

One of the most critical and difficult first tasks was to provide IT with a complete list of devices and configurations to be integrated. Since this had been done in an ad hoc method by the

regions historically, just getting a complete and accurate inventory of devices and infrastructure was difficult. An outside firm was enlisted to help gather and document this critical information, which allowed for a clear picture of the necessary design and implementation requirements. Once this information was being used to implement the new network infrastructure, continuous collaboration with the regions and the IT team was crucial to success.

This new network had to be designed in coordination within the NCDOT IT department as well as the statewide Department of Information Technology (DIT). Since all internet provider circuits must be procured through DIT, including all firewall and router configurations, continuous coordination between the IT department and DIT was critical to achieve desired outcomes.

The biggest outcome of this new ITS network being implemented across the state is a network infrastructure that is standardized, scalable and supportable. Network security has been brought up to state security standards with regular audits performed to ensure compliance. Reliability and availability have been improved, with full operational redundancy available across our regional TMCs.

One of the biggest lessons learned was the harsh reality of the department’s lack of maturity with regards to our ITS infrastructure and operations. Processes were rarely documented and often reactive without much standardization across the regions. While there is still much room for improvement, there are now clearly defined standards, configurations, and documentation for the ITS infrastructure.

A new and important benefit of this project was the ability to work effectively with our IT department and across all regions. This partnership was a critical component of the ability to design and upgrade this network infrastructure to meet the department’s needs. Standardization throughout the state is now in place, with clear policies in place to define the operation and maintenance of the infrastructure. This will allow for much better support and coordination moving forward as needs grow.