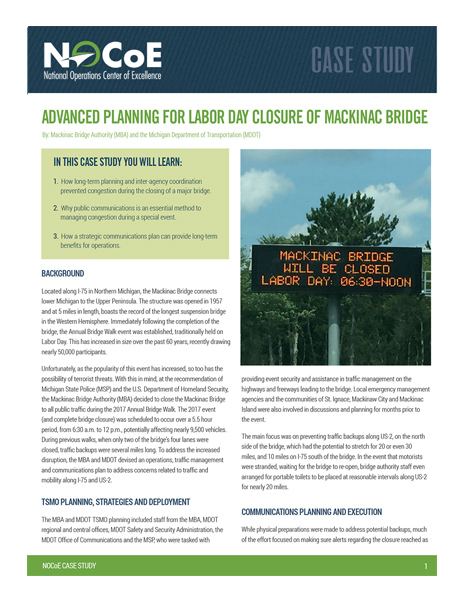 1. How long-term planning and inter-agency coordination prevented congestion during the closing of a major bridge.

2. Why public communications is an essential method to managing congestion during a special event.

3. How a strategic communications plan can provide long-term benefits for operations.

Located along I-75 in Northern Michigan, the Mackinac Bridge connects lower Michigan to the Upper Peninsula. The structure was opened in 1957 and at 5 miles in length, boasts the record of the longest suspension bridge in the Western Hemisphere. Immediately following the completion of the bridge, the Annual Bridge Walk event was established, traditionally held on Labor Day. This has increased in size over the past 60 years, recently drawing nearly 50,000 participants.

Unfortunately, as the popularity of this event has increased, so too has the possibility of terrorist threats. With this in mind, at the recommendation of Michigan State Police (MSP) and the U.S. Department of Homeland Security, the Mackinac Bridge Authority (MBA) decided to close the Mackinac Bridge to all public traffic during the 2017 Annual Bridge Walk. The 2017 event (and complete bridge closure) was scheduled to occur over a 5.5 hour period, from 6:30 a.m. to 12 p.m., potentially affecting nearly 9,500 vehicles. During previous walks, when only two of the bridge’s four lanes were closed, traffic backups were several miles long. To address the increased disruption, the MBA and MDOT devised an operations, traffic management and communications plan to address concerns related to traffic and mobility along I-75 and US-2.

The MBA and MDOT TSMO planning included staff from the MBA, MDOT regional and central offices, MDOT Safety and Security Administration, the MDOT Office of Communications and the MSP, who were tasked with providing event security and assistance in traffic management on the highways and freeways leading to the bridge. Local emergency management agencies and the communities of St. Ignace, Mackinaw City and Mackinac Island were also involved in discussions and planning for months prior to the event.

The main focus was on preventing traffic backups along US-2, on the north side of the bridge, which had the potential to stretch for 20 or even 30 miles, and 10 miles on I-75 south of the bridge. In the event that motorists were stranded, waiting for the bridge to re-open, bridge authority staff even arranged for portable toilets to be placed at reasonable intervals along US-2 for nearly 20 miles.

While physical preparations were made to address potential backups, much of the effort focused on making sure alerts regarding the closure reached as broadly as possible in the months leading up to the event. The strategy was to encourage individuals to modify their plans and cross the bridge before or after the closure. A communications plan was developed that included:

Despite concerns raised by the public, no measurable backups occurred during the event. As noon approached, some walkers had not completed the walk in time, so the bridge could not be reopened until roughly 12:25 p.m. During that time, there was a short, two-mile back-up along southbound US-2 that quickly diminished by 1 p.m. after the bridge reopened. More significantly, however, no major traffic incidents were report­ed during the event.

Although the 2017 event was extremely successful, there were complaints that there was not sufficient time to transport participants to the startingline in time to complete the walk. In 2018, the MBA addressed that by eliminating busing and starting the walk from both ends of the bridge. This was successful in addressing that concern and no participants were turned away.

The communications plan from 2017 was largely reused for 2018, updated for the changes to the event. No traffic backups were observed, and the bridge reopened on schedule.