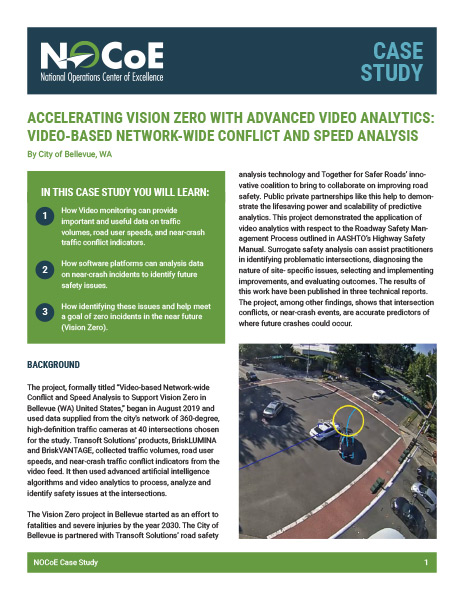 The Vision Zero project in Bellevue started as an effort to fatalities and severe injuries by the year 2030. The City of Bellevue is partnered with Transoft Solutions’ road safety analysis technology and Together for Safer Roads’ innovative coalition to bring to collaborate on improving road safety. Public private partnerships like this help to demonstrate the lifesaving power and scalability of predictive analytics. This project demonstrated the application of video analytics with respect to the Roadway Safety Management Process outlined in AASHTO’s Highway Safety Manual. Surrogate safety analysis can assist practitioners in identifying problematic intersections, diagnosing the nature of site- specific issues, selecting and implementing improvements, and evaluating outcomes. The results of this work have been published in three technical reports. The project, among other findings, shows that intersection conflicts, or near-crash events, are accurate predictors of where future crashes could occur.

The video monitoring platform provided livestreaming of the intersection video footage, calibration and validation of the data, video- based AI processing and safety analysis, quality control and data filtering, and presentation of analytics results on the dashboard.

In 2015, the City of Bellevue, WA adopted a Vision Zero and passed a resolution providing a framework to strive to eliminate traffic deaths and serious injury collisions on city streets by 2030. To achieve the 2030 goal, it is important to understand the problem and to develop the right tools to address it. The development of Bellevue's Action Plan included multiple engagement opportunities with staff, community stakeholders, and partner agencies. Through multiple online questionnaires, an online interactive mapping outreach tool, presentations to interest groups, Vision Zero Pledge engagement, and meetings with partner agencies, staff received insights that informed plan priorities, strategies, and actions.

Bellevue sees tremendous opportunities in video analytics to gather large amounts of safety data to rapidly identify locations that have a high risk of crashes – based on near- crash incidents – where the risk has not yet resulted in an actual crash. Knowing the location, time, and type of crashes that occur is critical to identifying countermeasures and eliminating the crashes. Bellevue partnered with three main agencies to conduct the first city- wide analysis of traffic camera video with the goal of improving road safety for all users:

Data collected from over 5,000 hours of video footage were used to produce the three reports:

One of the major findings is that intersection conflicts or near- crash events are an accurate predictor of where future crashes could occur. The data also found that people riding bicycles are at greater risk than vehicle occupants. Bike riders represent 0.1% of observed road users, pedestrians were 2.6% and motorists accounted for 97.3%. However, bicyclists were 10 times more likely to be involved in a conflict than motorists. Data also found that motorcyclists travelled at higher speeds and generated more critical conflicts than any other road user. More than 10% of drivers were speeding, with half of them traveling at more than 11 mph over the posted speed limit. Speeding incidence rates were relatively uniform on weekdays with a noticeable decrease around peak (commute) hours. Video footage showed 20,000 critical conflict interactions among the 8.25 million road users recorded during one week.

Video- based monitoring is an effective method to obtain conflict data in different ways. Unlike traditional traffic safety evaluation methods, video- based monitoring is detailed enough to identify near- crashes, classify road user types and their movements, and detect speeding infractions and lane violations. Cameras capture high- resolution data for ALL road users and modes of transportation within the field of view, compared to GPS or Bluetooth sensor data, which only capture some of the road users. Unlike LIDAR the use of video analytics is easily scalable and cameras are relatively easy to deploy and maintain alongside a traditional surveillance system. Videos are easy for people to review and understand, unlike many other data collection technologies that simply provide numerical data.