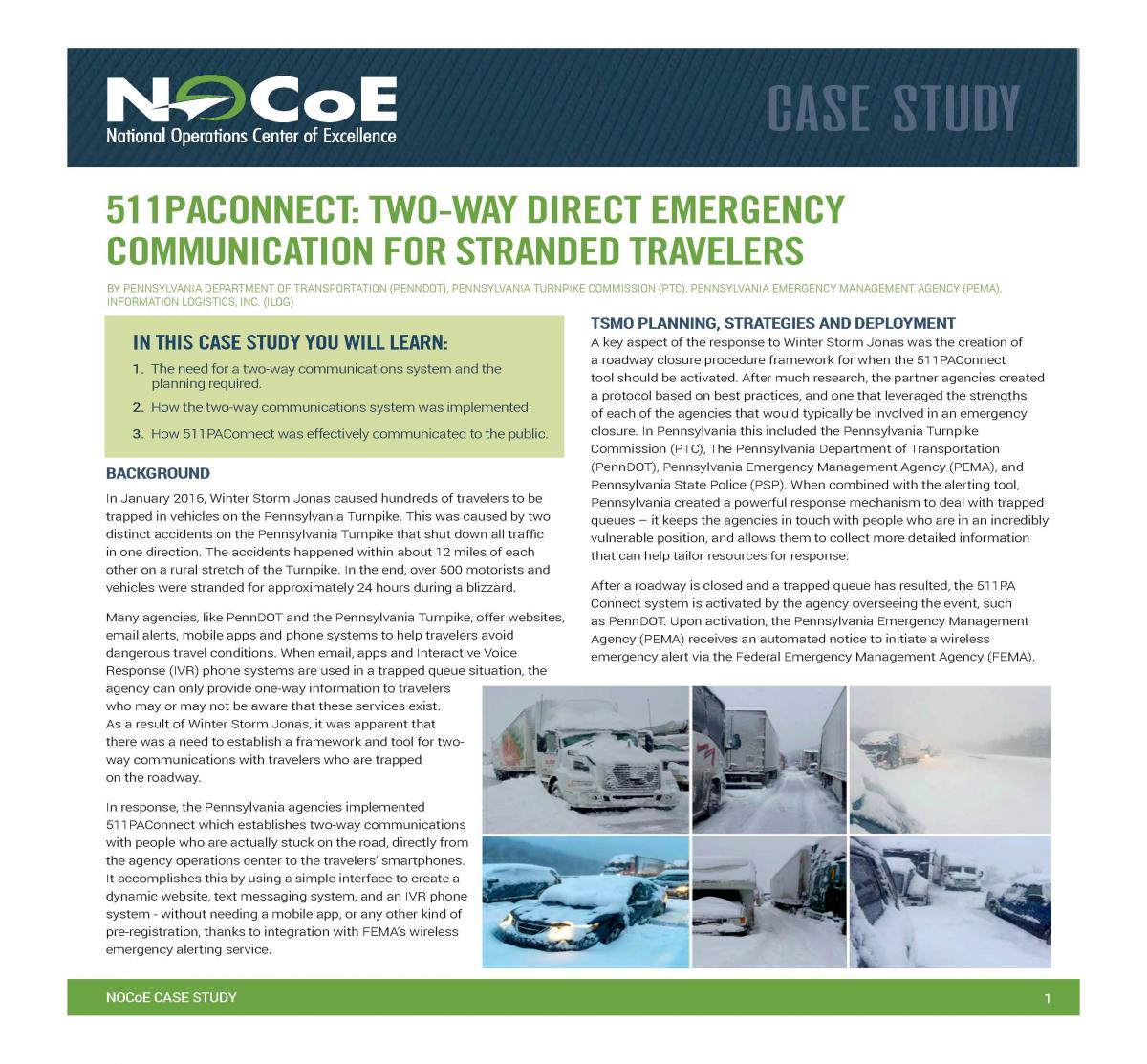 1. The need for a two-way communications system and the planning required.

2. How the two-way communications system was implemented.

3. How 511PAConnect was effectively communicated to the public.

In January 2016, Winter Storm Jonas caused hundreds of travelers to be trapped in vehicles on the Pennsylvania Turnpike. This was caused by two distinct accidents on the Pennsylvania Turnpike that shut down all traffic in one direction. The accidents happened within about 12 miles of each other on a rural stretch of the Turnpike. In the end, over 500 motorists and vehicles were stranded for approximately 24 hours during a blizzard.

Many agencies, like PennDOT and the Pennsylvania Turnpike, offer websites, email alerts, mobile apps and phone systems to help travelers avoid dangerous travel conditions. When email, apps and Interactive Voice Response (IVR) phone systems are used in a trapped queue situation, the agency can only provide one-way information to travelers who may or may not be aware that these services exist. As a result of Winter Storm Jonas, it was apparent that there was a need to establish a framework and tool for two-way communications with travelers who are trapped on the roadway.

In response, the Pennsylvania agencies implemented 511PAConnect which establishes two-way communications with people who are actually stuck on the road, directly from the agency operations center to the travelers’ smartphones. It accomplishes this by using a simple interface to create a dynamic website, text messaging system, and an IVR phone system - without needing a mobile app, or any other kind of pre-registration, thanks to integration with FEMA’s wireless emergency alerting service.

A key aspect of the response to Winter Storm Jonas was the creation of a roadway closure procedure framework for when the 511PAConnect tool should be activated. After much research, the partner agencies created a protocol based on best practices, and one that leveraged the strengths of each of the agencies that would typically be involved in an emergency closure. In Pennsylvania this included the Pennsylvania Turnpike Commission (PTC), The Pennsylvania Department of Transportation (PennDOT), Pennsylvania Emergency Management Agency (PEMA), and Pennsylvania State Police (PSP). When combined with the alerting tool, Pennsylvania created a powerful response mechanism to deal with trapped queues – it keeps the agencies in touch with people who are in an incredibly vulnerable position, and allows them to collect more detailed information that can help tailor resources for response.

This emergency notification is pushed to all phones in the incident area, similar to an Amber alert or severe weather notification. This message instructs travelers to visit 511PAConnect.com to register for closure updates. If the users agreed to give access to their locations, they will be plotted on the administrator’s map using color-coded icons, which gives the agency a clearer picture of the trapped queue. Throughout the event, registered travelers will be in an ongoing dialogue with the agency staff.

Agency operators can send texts or automated phone calls to all travelers, or sets of travelers (e.g. to commercial vehicles or school buses) or to individuals. The travelers can respond back to the agency, or can text back with concerns or to offer updates on conditions. The agency can give travelers important life-safety messages and travelers know that the agency is aware and working on the problem. Once travelers register for the event, they are only in the system for as long as the event lasts.

When the response to Winter Storm Jonas was being formulated, communication between the agencies involved was absolutely critical. They knew that no single agency could prevent or respond to these kinds of trapped queues alone; it had to be a joint effort. Through months of meetings, negotiations and policy debates, the road closure framework was developed, and the project had a solid basis for success.

When the framework and 511PAConnect tool were ready for deployment, communication with the public became the next critical task. The Pennsylvania agencies wanted to be sure that residents and visitors knew to look for the 511PAConnect message when they were trapped on roadways, and that registering with the system was the best way to assist responders. The CEO of the Pennsylvania Turnpike, Mark Compton noted that the traveling public feels comforted by the fact that the agency knows that you are stuck on the road, and can tell you that they are actively working to help you. The 511PAConnect was pushed heavily during the initial press conference in December 2016, and has been re-iterated by the Governor, as well as Secretaries of Transportation and Emergency Management, during subsequent press briefings for major storms.