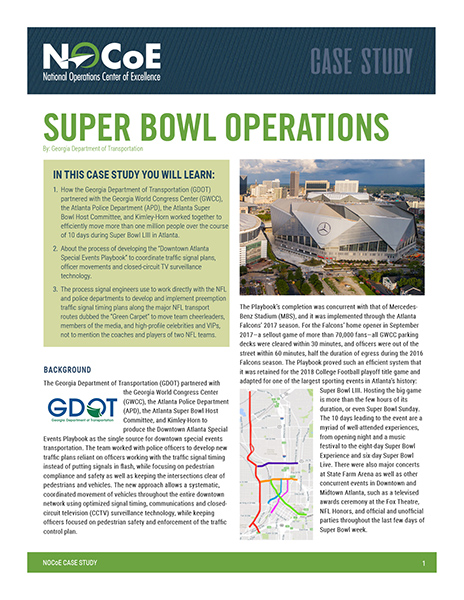 The Georgia Department of Transportation (GDOT) partnered with the Georgia World Congress Center (GWCC), the Atlanta Police Department (APD), the Atlanta Super Bowl Host Committee, and Kimley-Horn to produce the Downtown Atlanta Special Events Playbook as the single source for downtown special events transportation. The team worked with police officers to develop new traffic plans reliant on officers working with the traffic signal timing instead of putting signals in flash, while focusing on pedestrian compliance and safety as well as keeping the intersections clear of pedestrians and vehicles. The new approach allows a systematic, coordinated movement of vehicles throughout the entire downtown network using optimized signal timing, communications and closed-circuit television (CCTV) surveillance technology, while keeping officers focused on pedestrian safety and enforcement of the traffic control plan.

The Playbook’s completion was concurrent with that of Mercedes-Benz Stadium (MBS), and it was implemented through the Atlanta Falcons’ 2017 season. For the Falcons’ home opener in September 2017—a sellout game of more than 70,000 fans—all GWCC parking decks were cleared within 30 minutes, and officers were out of the street within 60 minutes, half the duration of egress during the 2016 Falcons season. The Playbook proved such an efficient system that it was retained for the 2018 College Football playoff title game and adapted for one of the largest sporting events in Atlanta’s history: Super Bowl LIII. Hosting the big game is more than the few hours of its duration, or even Super Bowl Sunday. The 10 days leading to the event are a myriad of well-attended experiences, from opening night and a music festival to the eight-day Super Bowl Experience and six-day Super Bowl Live. There were also major concerts at State Farm Arena as well as other concurrent events in Downtown and Midtown Atlanta, such as a televised awards ceremony at the Fox Theatre, NFL Honors, and official and unofficial parties throughout the last few days of Super Bowl week.

GDOT’s innovative Regional Traffic Operations Program (RTOP) partnered with the leadership from the GWCC, APD, and Kimley-Horn and it’s RTOP team of subconsultants to control signal timing focused on safety and efficiency. In the interest of traffic flow and security, working with its partners GDOT’s RTOP team led by Kimley-Horn implemented signal and ITS upgrades throughout the Downtown and Midtown network. With more than 250 intersections primed with optimized signal timing, GDOT upgraded firmware and 4G communication at each intersection, installed an additional 40 closed-circuit television (CCTV) cameras, developed and programmed special signal timing action sets, and developed a state of the art performance metrics website to report constant updates on the performance of the traffic network.

Part of the new ITS deployment included programming for time-of-day pedestrian scrambles, designed for all-way pedestrian crossings during heavy volume times that could be controlled directly from the GDOT Traffic Management Center (TMC). With each signal synchronized to “walk” for an extended period, open intersections were flooded with moving pedestrians when foot traffic was at its peak. The scrambles also allowed vehicles to pass through intersections easily during the “don’t walk” phase, as pedestrians were forced to only cross during the scrambles which minimized vehicle/pedestrian conflicts and congestion. In the past, most intersections with heavy pedestrian crossings required at least six officers to manage the crowd and vehicles. With the updated signal timing and TMC control, an intersection can be managed by two officers.

In a similar vein, moving team cheerleaders, members of the media, and high-profile celebrities and VIPs, not to mention the coaches and players of two NFL teams, required a clear path as well. Signal engineers worked directly with the NFL and police departments to develop and implement preemption traffic signal timing plans along the major NFL transport routes. This cleared out congestion ahead of the bus movements and enhanced the safety of police escorts and vehicles and pedestrians along the corridors. This signal timing application was dubbed the “Green Carpet” and was rolled out to the NFL’s transportation team to help facilitate more efficient and safe movement of hundreds of buses and black cars on Super Bowl Sunday. When it was time for movement, police escorts radioed traffic engineers, and upwards of a dozen traffic signals were controlled by the preprogrammed action sets to provide green indications at a time for the duration of the escorted groups’ travels. The “Green Carpet” not only decreased the travel times for these major escorted movements, but it improved the safety for all users along the corridors by maximizing the use of traffic signal technology and minimizing police overriding the traffic operations.

Communication on traffic operations among Downtown Atlanta’s three big event centers was extremely limited prior to the Playbook. The process of developing the Playbook took more than a year of planning and included working with local, state, and federal public safety officers stationed in multiple command centers and on the ground throughout Atlanta. With Atlanta’s formidable traffic universally understood, the Super Bowl LIII Transportation Playbook became the binding tie among all agencies involved.

The Playbook was the reference for GDOT’s RTOP team, training their Traffic Management Center (TMC) with:

With prior large-scale Atlanta events as experience, the Super Bowl LIII Transportation Playbook reinforced a notion of consistency for ingress and egress of more than one million people over the course of 10 days. GDOT anticipated situations for high impact attendees, with real-time communication between TMC command and police officers in the field. While there is room for improvement, the challenge coordination among all levels of operation became more refined throughout the week’s activities.