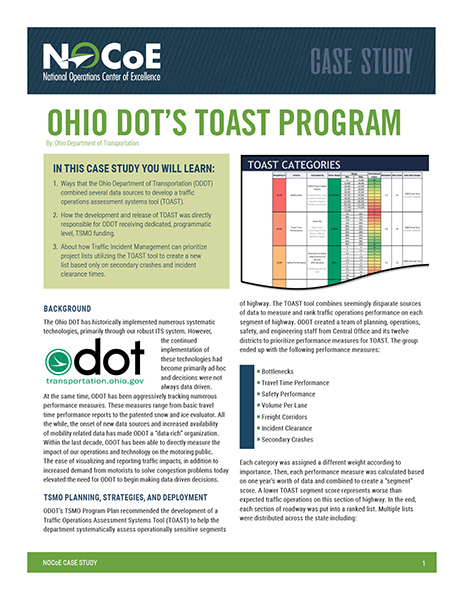 The Ohio DOT has historically implemented numerous systematic technologies, primarily through our robust ITS system. However, the continued implementation of these technologies had become primarily ad-hoc and decisions were not always data driven. At the same time, ODOT has been aggressively tracking numerous performance measures. These measures range from basic travel time performance reports to the patented snow and ice evaluator. All the while, the onset of new data sources and increased availability of mobility related data has made ODOT a “data-rich” organization. Within the last decade, ODOT has been able to directly measure the impact of our operations and technology on

the motoring public. The ease of visualizing and reporting traffic impacts, in addition to increased demand from motorists to solve congestion problems today elevated the need for ODOT to begin making data driven decisions.

ODOT’s TSMO Program Plan recommended the development of a Traffic Operations Assessment Systems Tool (TOAST) to help the department systematically assess operationally sensitive segments of highway. The TOAST tool combines seemingly disparate sources of data to measure and rank traffic operations performance on each segment of highway. ODOT created a team of planning, operations, safety, and engineering staff from Central Office and its twelve districts to prioritize performance measures for TOAST. The group ended up with the following performance measures:

Each category was assigned a different weight according to importance. Then, each performance measure was calculated based on one year’s worth of data and combined to create a “segment” score. A lower TOAST segment score represents worse than expected traffic operations on this section of highway. In the end, each section of roadway was put into a ranked list. Multiple lists were distributed across the state including:

TOAST has had a huge impact on ODOT’s TSMO Program. A large part of the success is due to communication about TOAST. As much as possible, ODOT communicated about the importance of leveraging existing data when discussing TSMO. Communication with technical staff was important to expedite development of the tool. The TOAST tool itself was built internally by ODOT staff. It was intentionally built as an easy-to-use spreadsheet. Simple and approachable maps were created and shared widely at ODOT. A simple one-pager was built to communicate why TOAST was built and what TOAST is about.

The communication about TOAST helped at a few critical points in the TSMO Program’s development:

Multiple meetings were attended to explain and discuss the TOAST data, maps, and philosophy. Users are most interested in how the program may be modified to include their data or customized to assist them with operations planning at the local level.

The development and release of TOAST was directly responsible for ODOT receiving dedicated, programmatic level, TSMO funding. Without TOAST it is unlikely that ODOT would have dedicated TSMO funding. ODOT has already sharpened our planning practices to increase the focus on lower cost, quicker implementation countermeasures. The early initiation of projects are now required to cross reference the TOAST list of any potential TSMO countermeasures. Even ODOT’s major expansion program has presented TOAST as a “tie breaker” to ODOT’s largest transportation investments.

Individual programs have also benefited from TOAST. One example is the Ohio Traffic Incident Management (TIM) program. Existing regional TIM groups were able to utilize the TOAST tool to create a new list based only on secondary crashes and incident clearance times. These “subsets” of TOAST have helped tweak regional practices. All in all, ODOT is making more data driven decisions.